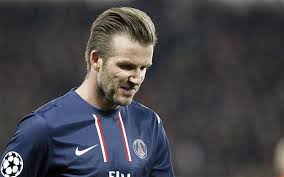 The former England captain will retire from football at end of season.

“He is going to play,” Italian Ancelotti, who avoided questions about his own future, told a news conference.

Beckham, 38, said on Thursday that he would retire from playing at the end of the season, after a short stint at PSG, triggering an avalanche of tributes to the former England captain.

Ancelotti joined the chorus, saying: “He loves his job, he is a very very humble player, and these are the best qualities I saw in his character.

“He had fantastic passing qualities; he was one of the best in the world in that department.”

It will be Beckham’s 10th Ligue 1 appearance this season after he joined PSG in late January.

Earlier on Friday, club president, Nasser Al-Khelaifi, reiterated his desire to see Beckham stay in Paris, although in a non-playing capacity.

“I met him yesterday, he believes in the PSG project,” Al-Khelaifi said at a separate news conference.

“He enjoyed the last six months, we have time to discuss, we’ll be discussing over the next two weeks and hopefully, we will announce an agreement together.

“I told him ‘the door is open for you’ and he wants to be involved.”

Al-Khelaifi still has to meet with Ancelotti to discuss the Italian’s future amid speculation he could leave.

Ancelotti, whose contract runs until June next year, was not too worried about it.

“I haven’t thought about it. I have been busy with the (title) celebrations and other things,” he said.

Asked when he would announce his decision, he replied: “I don’t know”, adding that he would not answer questions on the matter until he would have made up his mind.

Earlier this week, Al-Khelaifi told Reuters that he had turned down a Real Madrid move to hire Ancelotti.

“They (Real) came and I discussed it with them. He’s got a contract with us for one more year…for me, he’s here till next year,” Al-Khelaifi said.

PSG clinched their first French league title since 1994 last Sunday when they claimed a 1-0 win at Olympique Lyon.

Where Did David Mark Get the Funds for His Private University? By Pius Adesanmi