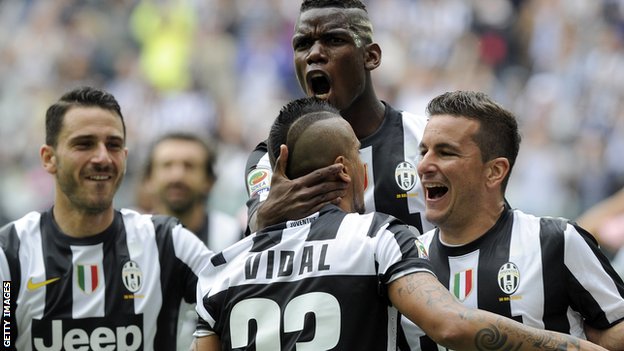 The win is the first time Juve won back-to-back titles in 10 years.

A penalty from Arturo Vidal secured the win and gave Juventus an unassailable 14-point lead over second-placed Napoli, with four games to play.

It is the first time they have won back-to-back titles in 10 years, excluding the titles of 2005 and 2006 which were subsequently stripped.

They now have 11 more titles than anyone else in Italy.

Juventus had both the 2004-05 and 2005-06 championships removed in July 2006 after an Italian Football Federation ruling regarding match-fixing and were also demoted to the Italian second division along with Lazio and Fiorentina.

Despite their 29th Scudetto success, Sunday was not the perfect day for the ‘Old Lady’ as Juve finished the game with 10 men, after former Manchester United midfielder Paul Pogba was sent off for spitting at Palermo defender Salvatore Aronica.

For Italian midfielder, Andrea Pirlo, the title is his third in three successive seasons and fourth in total, after he won with AC Milan in 2004 and 2011 and with Juventus in 2012 and 2013.

Meanwhile, crowd banners – and Juve’s official website – featured the number 31 prominently, in reference to the 29 titles plus the two taken away from them.

Elsewhere in Serie A, Mario Balotelli was AC Milan’s saviour at the San Siro as he scored in the closing stages against Torino to seal his side’s 1-0 victory.

Fiorentina’s defeat by Roma on Saturday evening meant Milan had a chance to increase the gap between themselves and the Viola in fourth to four points, with only three rounds of league matches left to play.

And Balotelli’s close-range strike in the 84th minute did just that, as a lapse in concentration from Torino was punished by the former Manchester City striker.