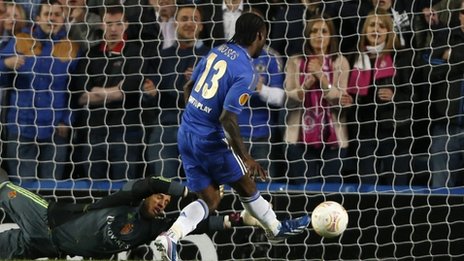 Nigeria’s Victor Moses continued his impressive goal scoring form in the Europa League as he netted one of the goals in Chelsea’s 3-1 win over Swiss Champions, FC Basel; helping his London club cruise into the final with a 5-2 aggregate score line

Basel’s Mohammed Salah had given Chelsea a scare when he shot the visitors ahead with the last kick of the first half.

Chelsea showed character in the second half scoring three goals to seal their place in this month’s Amsterdam final.

Fernando Torres started Chelsea’s revival at the Stamford Bridge with the equalizer, before Victor Moses scored the second goal, and then David Luiz netted Chelsea’s third to keep them on track on getting silverware this season.

It was however not the same good news for another Nigerian player in action on Thursday night. Joseph Yobo’s Fenarbahce were defeated 3-1 by Benfica, which meant the end of the road for the Istanbul side that only managed a lone goal victory in the first leg.

Benfica progressed 3-2 on aggregate and will now face Chelsea in the final on May 15.

If Moses and his Chelsea teammates win the final, they will be the first side to win the champions League and Europa League back to back.