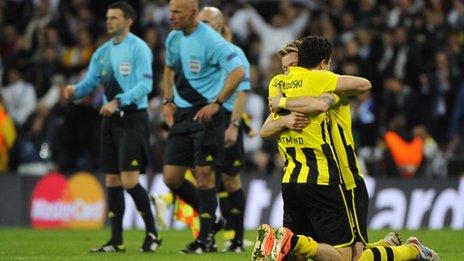 UEFA Champions League: Dortmund through to final despite Madrid defeat

Dortmund qualified on a 4-3 aggregate win.

Real Madrid attempted a late comeback scoring two goals in the 83rd and 88th minute; but it was too little too late as the 2-0 victory over Borussia Dortmund in Tuesday night’s UEFA Champions League second leg semi final duel at the Santiago Bernabeau could not earn them a place in the final.

Dortmund showed no respect whatsoever for their host, battling to a 0-0 scoreline; but though they caved in the last 10 minutes they still secured a ticket to the Wembley final on a 4-3 aggregate.

Madrid will have themselves to blame has they squandered the early chances that came their way in the early exchanges.

The Spanish giants had started out like a house on fire fully aware they needed at least a 3-0 win to make the finals; but glaring chances that came the way of Gonzalo Higuain, Ronaldo and Mezut Ozil in the first 15minutes were not converted.

The German side later settled well into the game as they played so well like they never had any advantage from the first leg.

On resumption of the second half the German side were dictating the pace and in the 50th minute Lewandoski was close to punishing Madrid again as his thunderbolt shot hit the cross bar with the ball rolling across the face of goal.

Jose Mourinho tried to salvage the situation with the double substitution that saw the introduction of Kaka and Benzema who came in for Contreao and Higuain.

That change seemed to have an effect as Benzema scored one and created the assist for the other goal scored by Sergio Ramos.

At the end, it was the German side that progressed and would now wait to face the winner between Bayern Munich and Barcelona in Wednesday’s other semi final duel.