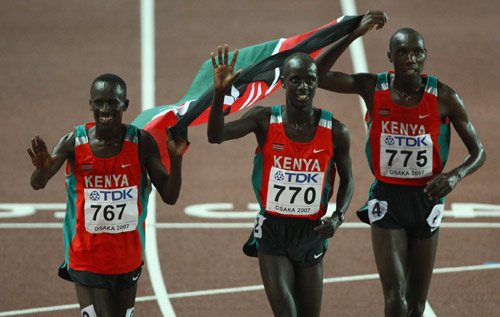 Five Kenyan runners have been sanctioned for various doping offences in the past two months.

IAAF are also seeking to collaborate with World Anti-Doping Agency, WADA, to establish a laboratory to test samples collected in the region either in Nairobi or Eldoret, Athletics Kenya, AK, boss, Isaiah Kiplagat, said on Thursday.

“In the next three months, we expect progress to have been made on the proposed BTC. IAAF came up with the idea after extensive discussions about the seriousness of doping cases in this country,” he said.

“Currently, all samples collected here are sent to South Africa or Germany for analysis and having a lab here will keep us ahead in our fight to ensure that our athletes are clean,” the chair added.

The development comes hot on the heels of the Kenyan federation revealing that five runners had been sanctioned for various doping offences in the past two months.

“The matter has received a lot of attention at the IOC, WADA and IAAF. From the BTC, we shall have biological passports for every athlete in Kenya and Ethiopia,” Kiplagat said.

Biological passports monitor changes in the blood system and have been turned to in the global effort to identify cheats with high profile bursts such as the disgraced 2008 Beijing Olympics men’s 1,500m champion, Bahrain’s Rashid Ramzy, among those who have been unearthed by comparing samples collected in different seasons.

Kiplagat slammed the Kenyan Government for failing to get off the committee set up in January to investigate allegations of rampant doping amongst the country’s runners.

“WADA have sent many emails to the Government and copied to us asking what is happening and we raised the issue two months ago and the Sports Commissioner said they had already allocated (approximately $43,178) to the commission.’’

“We do not know why they are not working up to now but we can only wait since WADA only contracts the Government, not federations,” he said.

Wilson Erupe Loyanae and Nixon Kiplagat Cherutich are serving a suspension of two years each with Moses Kiptoo Kurgat being sanctioned for a year after Athletics Kenya announced in February that both their A and B samples tested positive to banned substances.

Loyanae tested positive for EPO, or erythropoietin, in an out-of-competition test conducted last year, the first Kenyan athlete to be caught using the banned drug hormone which increases the red blood cell count.

Nixon Kiplagat Cherutich tested positive to the anabolic steroid, Nandrolone, after competing in a race in Mexico.

On March 20, Salome Jerono Biwott who won the women’s race at the 2012 Stanchart Nairobi International Marathon in 2:26:41 and Jynocel Basweti Onyancha who took part in the 23rd Marathon International De Cullacan in Mexico on January are serving two-year ban each after being added to the doping list of shame.