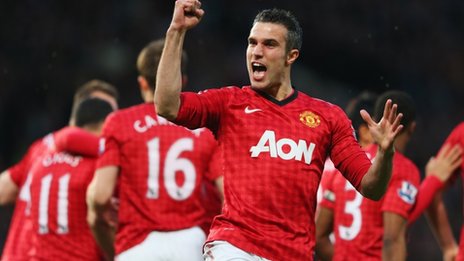 Dutchman, Robin Van Persie, showed just how much he is hungry for the English Premier League title as he singlehandedly fired Manchester United to a record 20th League title on Monday night at the Theatre of Dreams (Old Trafford).

The former Arsenal man started the night brightly as his simple tap-in from a Ryan Giggs pass put United ahead in the 2nd minute.

Barely ten minutes later, Van Persie, RVP, doubled United’s lead with a wonder goal has he controlled a long ball from Wayne Rooney and shot a volley into the net.

The dramatic night for RVP continued with over 75,000 Red Devils fans in attendance as he completed his hat trick on the 33rd minute.

Monday’s hat-trick for RVP is his fifth in the EPL and he would be glad that his 24 goals so far this season has not gone down the drain having won the EPL title, a feat he only dreamt of while staring for Arsenal.

With the job already completed in the first half, United took their feet off the pedal as score stood at 3-0; and Sir Alex Ferguson smiled away with his 13th league crown.

For Villa, the heavy defeat has compounded their relegation woes.