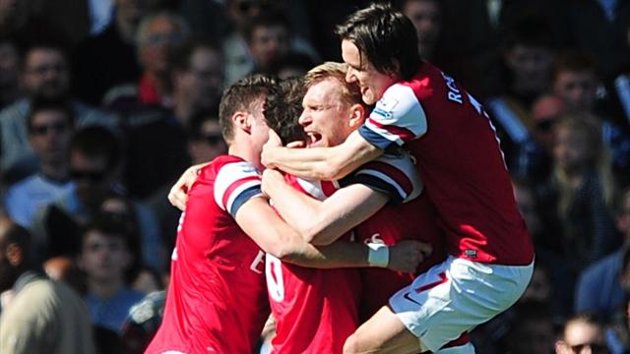 QPR lost their 15th game at home this season.

Arsenal on Saturday kept their top-four finish ambition alive as they moved back into third place in the Premier League with a far from convincing 1-0 win over 10-man Fulham.

The Gunners dominated the start of the London derby and were expected to enjoy more advantage after Fulham’s Steve Sidwell got a straight read card in the 12th-minute for a rash challenge on Mikel Arteta.

The one-man advantage however failed to show as Fulham instead started to pose the greater threat on the break and Arsenal were fortunate to lead at half-time thanks to Per Mertesacker’s simple header.

Fulham who have been unbeaten in their last four meetings against Arsenal pressed hard for an equalizer that never came as the Gunners held on, despite a frantic push and Olivier Giroud’s red card in the latter part of the game.

In other venues, Manger Paolo Di Canio continued his revival with Sunderland has his team secured a lone goal victory over Victor Anichebe’s Everton.

At the Hawthorms, West Bromich Albion without Nigeria’s Osaze Odemwingie forced visiting Newcastle to a 1-1 draw; while at Loftus road QPR looks dead and buried after going down at home for the 15th time this season to stoke City, 0-2.

West Ham defeated Wigan 2-0; while Southampton and Swansea ended it even 0-0 in the day’s other fixture.