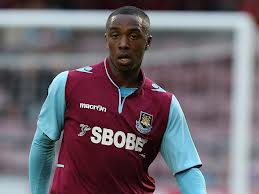 Fanimohas played for England at U-16 and U-17 levels.

A Nigerian-born Briton, Matthias Fanimo, has said that he intends to play for Nigeria’s U-20 team, the Flying Eagles.

Fanimo, who has played for England’s U-16, U-17 and U-18 teams, disclosed his ambition on Wednesday in Lagos, while speaking with the News Agency of Nigeria on telephone from London.

He wants the John Obuh coached team to give him a trial now that it has said it was looking for players to include in the Turkey U-20 World Cup squad.

The 19-year-old midfielder, who plays for West Ham United FC of England, said that his experience had equipped him to make a difference in the Nigerian team.

Fanimo, who made his debut in the England U-16 team against Scotland in the Victory Shield in 2008, said he was motivated seeing Mikel Obi and Efe Ambrose playing for Nigeria.

He signed his first professional contract with West Ham United in 2011 and also played against Crewe Alexander in the 2012 Football League Cup which they won 2-0.

“I have gathered some experience which I think will help me to make a good career by playing for Nigeria,’’ Fanimo said.

Fanimo then made his debut at U-17 level on August 3, 2010 against Finland and also made his U-18 debut on September 16 against Slovakia.

The player was born on January 28 and was discovered by the West Ham Football Academy at the age of five.

Reacting to the decision, his father, Olabode Fanimo, said he was glad to see him thinking of what to do for his country.

He said that he would have interfered in his son’s decision earlier, ”but for the law of the U.K which does not support forcing children against their will.

“Matthias has been involved in developmental football right from when the West Ham United Football Academy discovered him when he was five years old.

“I will always give him the needed support to succeed”.

The elder Fanimo appealed to the Nigeria Football Association (NFA) to give the lad a chance, saying that having such young foreign-based players would inject new trends into Nigerian football.