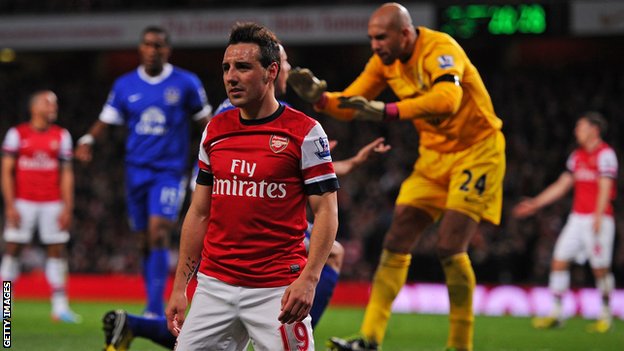 It was a goalless draw in the match between Everton and Arsenal.

Nigeria’s Victor Anichebe was in the thick of action as Everton battled to a goalless draw against Arsenal at the Emirate Stadium on Tuesday night.

The draw for the Toffees keeps alive their faint hopes of a top four finish as the race for Champions League spots in England goes to wire.

Tuesday night’s Premier League clash at the Emirate was action packed as both teams were involved in end-to-end feat but failed to find the back of the net.

Everton will see the draw as a point gained on the road while for Arsenal it will be two points dropped at home.

Everton manager, David Moyes, had before the trip to London retreated that his side must get at least a draw against Arsenal if they are to maintain their faint hopes of qualifying for the Champions League next season.

And with that now achieved, it will be game on as Everton push their luck further with the remaining five matches.

In the schedule of fixtures ahead, Everton will be travelling to face a resurgent Sunderland team on April 20.

They will then host Fulham at the Goodison Park on April 27 before visiting Anfield for the Merseyside derby against Liverpool on May 5.

They will finish off their season at home against West Ham United on May 12 and hope they would have done enough to seal a place amongst the top four teams.