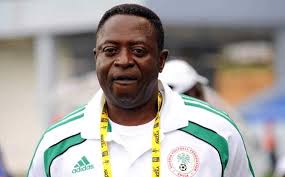 There were reports that former Nigerian coach, Ahmodu Shuaibu, had been appointed.

The Nigeria Football Association (NFA) is yet to appoint a Technical Director for the national teams, Musa Amadu, the Secretary-General, has said.

Mr. Amadu said on Thursday in Abuja that there were procedures to be followed in appointments of such magnitude. He said although candidates were interviewed for the job earlier this week, the NFA had yet to come out with the name of the successful candidate.

He dismissed reports that the Glasshouse had issued appointment letters to the employees.

“Nobody has been told anything. We have not issued out a statement or informed anybody that we have hired anybody. However, there is an ongoing process to hire technical director or directors for the national teams but it is not yet completed.

“The process will be completed when the board of NFA meets to consider the recommendations of the technical committee on the matter,” Mr. Amadu said.

There were media reports of the employment of a technical director with two assistants for the various national teams.

It was reported that former Super Eagles Head Coach, Amodu Shuaibu, was appointed as technical director for the national teams.