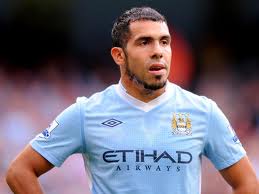 The Manchester City forward was also fined a thousand pounds.

Argentinean International, Carlos Tevez, has been sentenced to 250 hours of community service after he pleaded guilty to two charges.

The Manchester City of England forward pleaded guilty to driving without insurance and driving while disqualified.

The Macclesfield Magistrates’ Court in England also disqualified him from driving for a fresh six months; and fined him one thousand pounds (N250,000).

Tevez was originally given a six-month driving ban in January when he pleaded guilty to two counts of failing to provide information about incidents when his Hummer car was clocked speeding. The ban was to have lasted from January 16 to May 25.

In apparent violation of the ban, he was stopped by police while driving a white Porsche outside of Mottram Hall Hotel and Golf Club in Cheshire on March 7 following an anonymous tip-off.

When he was stopped, Tevez told the officer: “I only live down the road. Two minutes.”

The 29-year-old footballer’s lawyer, Gwyn Lewis, said that the striker was unlikely to commit a similar offence and sought a sentence of “unpaid work.”