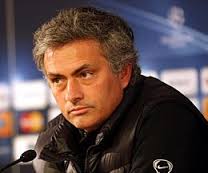 Real Madrid coach, Jose Mourinho, has stated that he loves London and would return to work or live there someday.

The former Chelsea of England Coach told SunSport in London on Tuesday that he would love to return to England someday, He ruled out coming to Manchester United or local rivals Manchester City in the summer.

Mourinho, who was in London to watch the international friendly match between Russia and Brazil, revealed his undying love for London and his desire to return to the city.

“I am in London very often because we have a house here. We love it here, and our daughter is coming to study in London,” Mourinho was quoted as saying.

“I say every day that I love it here, I had a fantastic time here, that I will return one day, so to be fair, I give a little bit of contribution to that speculation just because I love it.

“I have big emotional connections with Chelsea and one day I think naturally I have to be back to English football or to Chelsea or to another club.

“Of course, Chelsea means different things to me than other clubs. Chelsea is in my heart as is Inter. One day, I have to be back,” he added.

The coach, who has won the European Champions League with three different clubs in different countries, said even if he’ll be moving to England next season, he would not move to any of the Manchester clubs.

“I think Manchester is Sir Alex’s kingdom and I would love that job to be his job forever. In the other job in Manchester is Roberto who has a contract and was champion last year. So I don’t think there is a move over there and I hope everything goes well for everybody — even for Benitez.”

Early on Monday, Mourinho reportedly held a private meeting with the Chelsea owner, Roman Abramovich, where the deal to bring former back to Stamford Bridge was discussed.

A three-year contract was said to have been agreed at the end of the meeting which began over several weeks of talks, though it is yet to be signed.

“Chelsea have decided that Jose is the man they want now”, The Daily Express quoted a source close to Abramovich on Monday.

“Roman has run out of options and bringing Jose back is the only move that will get the fans back onside. Chelsea now wants this to happen – and it will,” the source to Daily Express.

Abramovich has lost patience with interim manager, Rafa Benitez, who will leave the club in May as agreed. But he knows he cannot make another change before the end of the season or the fans will turn on him.

But the Russian, who on Monday denied rumours that he was detained in the U.S., has decided to swallow his pride and ask Mourinho to bring the glory days back to Stamford Bridge.

Mourinho, however, is reportedly delaying putting pen to paper, with a wish that Chelsea finishes in the top four and secure Champions League football for next season.

Abramovich had wavered for weeks on whether to bring back Chelsea’s most successful manager. The pair fell out before they parted ways in September 2007 in what Mourinho referred as on mutual consent.

Mourinho, who is set to leave Real Madrid after three years in charge, had hinted at the weekend that he could “go back to somewhere I have already been”.

I’m happy to be back to Super Eagles – Obafemi Martins