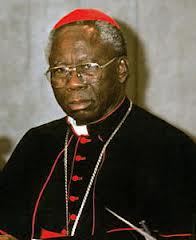 In a yet to be announced day in March, 117 cardinals from across the world will converge in the Vatican City to elect a new Pope.

These 117 cardinals are members of the Catholic Church’s highest decision-making body known as the conclave. The conclave is presently made of 214 members; but church rule stipulates that only cardinals below the age of 80 are eligible to vote, leaving the 117. The out-going pope, Benedict XVI, appointed 67 of the voting cardinals into the conclave.

With rumour that the pressure of a brewing rancour within this group of elite priests may have forced Pope Benedict XVI to resign, analysts say the pope may be keen on who becomes his successor after he retires to a period of  “prayer and reflection” at the  Mater Ecclesiae Monastery in Vatican City.

With at least 57 per cent of conclave thankful to him, Pope Benedict will no doubt hold a huge influence on who becomes the next leader of the world’s 1 billion Catholics.

With only nine Africans eligible to vote, the emergence of an African pope seems unrealistic. Also the growth of Pentecostal Christianity has depleted the Catholic population in Africa. Africa accounts for just 15 per cent of the world’s Catholic population as opposed to South America with over 30 per cent. However, Vatican watchers, religious analysts and even bookers are favouring an African as the next pope.

This is not the first time. Just before the appointment of Cardinal Ratzinger as Pope Benedict XVI, the odds had favoured Nigerian-born cardinal, Francis Arinze, to take over from Pope John Paul II. He was believed to be one of the closest allies of the late pope.  But days before the election, his chances were obliterated by the then Cardinal Ratzinger.

Again, many Vatican analysts are tipping him as the favourite. British bookmakers also favour him to adorn the papal ring. William Hill named him as their favourite to replace the pontiff with a 2-1 chance. Coral also tipped the 80-years-old as the likeliest to replace Benedict with odds of 7-4. He is the second best in Irish bookmaker, Paddy Power’s probable list, next to Canadian Cardinal Marc Quellet (5-2) with the odds of 3-1.

Another plus for Mr. Arinze is that he is seen as an ultra- conservative. For an institution that has seen very little change since the medieval period, nothing so far indicates that the church is ready for any radical changes in its doctrine. Forget the calls for the oath of celibacy to be lifted by some Irish priests, or the “radical feminism” of American nuns, they will amount to nothing, at least for some time to come. The church knows how to handle disquiet among its fold.

To maintain the status quo, the church needs an unwavering conformist to head the Holy See. Mr. Arinze, the Cardinal-Bishop of Velletri-Segni (a position held by Joseph Ratzinger before he was elected Pope Benedict XVI) is the best of that breed. He has proven several times that he’s not daunted by the call for liberalism in the church. He is one of the most outspoken critics of homosexuality and abortion. In 2003, during a lecture in Georgetown University, Mr. Arinze likened homosexuality to fornication, adultery and pornography. After the lecture, there was protest in the city in reaction to his lecture. The cleric was also one of the most outspoken critics of Dan Brown’s fictional work “The Da Vinci Code.”

With Pope Benedict retiring due to tiredness attributed to old age, the conclave may want to favour a younger pope this time around. This is the tallest hurdle Mr. Arinze needs to cross to become pope. This may not be much a problem as many people would like to believe. The average age of the voting members of the papal conclave is 72.  That of the non-voting member is 86. The conclave is a geriatric group; they may just settle for one of the most experienced member from their fold.

Born in 1932 at Eziowelle, in Anambra State, Mr. Arinze was baptised on his ninth birthday by Blessed Father Michael Tansi who was beatified by Pope John Paul II in 1998. He was ordained a priest in 1958. He holds a doctorate in Theology from the Pontifical Urban University, Rome. His doctorate thesis was on “”Ibo Sacrifice as an Introduction to the Catechesis of Holy Mass”.

The other African Cardinal after Arinze, widely tipped to become the next Vicar of Christ (one of the numerous titles of the pope), is the Cardinal of Cape Coast, Ghana, and the President of the Pontifical Council for Peace and Justice, Cardinal Peter Appaih Turkson.  At 65, he is one of the youngest members of the conclave. He is smart, outspoken and a moderate.

Mr. Turkson comes second only to Mr. Arinze in bookmakers’ choice. He gets an odd of 5-2 from William Hill. Coral says he has a 2-1 chance of emerging as the next pope, while Paddy Power tipped him as their fourth most favourite with a 4-1 chance.

As Africa’s youngest cardinal, he is unabashedly political. Unlike the diplomatic Mr. Arinze, whose utterances are framed in such a way as not to rock the Vatican political canoe, Cardinal Turkson is not afraid to tell the world where his political tent is pitched.

In 2009, when asked in a Vatican news conference if the church is ready for a black pope, “why not” he responded.

“We’ve had Kofi Annan as Secretary General of the United Nations … he had his problems, but he did it. Now we have Obama in the United States. So, if by divine providence, God would wish to have a black man as pope, I say thanks be to God!” he said.

He is a staunch critic of the IMF and has called for a reform in the global financial system.

Unlike Mr. Arinze, his theology is seen as moderate. Mr. Turkson has indicated that he’s favourably disposed to the call for the use of condom in couples where one is HIV-positive and the other negative as means of preventing the transmission of the disease and not as a contraceptive.

As the president of the Council of Peace and Justice, he has called on Catholics to learn from other denomination and faiths. He asked Catholics to emphasise more on the gift of the Holy Spirit, intercessory prayers and healing like the Pentecostals. He advised Catholics to read the Quran as a means of bridging the gap of understanding.

The chance of Turkson emerging as the next pope has also been highlighted by his position as relator of the synod of bishop; a position once held by both Popes John Paul II and Benedict XVI. In fact two other frontrunners for position, Cardinal Angelo Scola of Venice and Marc Ouellet of Quebec City in Canada once held the position as well.

Born on October 11, 1948 he was ordained a priest in 1975. He was consecrated in 1993 and appointed a cardinal in 2003 by Pope John Paul II. He holds a doctorate in scripture from the Pontifical Biblical Institute.

Though Cardinals Arinze and Turkson appear the more favoured Africans with a chance of becoming pope, their chances of emerging pope will be determined by the 117 voting conclave members including the 9 African members. Though Mr. Arinze can be voted for, he cannot vote as he is already 80.

List of African members of the conclave eligible to vote

Kidnappers of French nationals crossed to Nigeria with victims- Cameroon