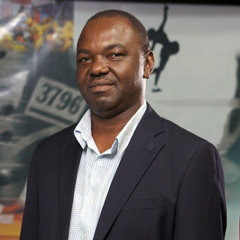 Shock over sudden death of Channels’ Television Head of sports

The deceased presented a sports programme on Friday evening.

The sudden death of Joseph Ighile, the Head of Sports at Channels Television, on Friday night, has left Nigerian sports fraternity reeling with shock.

Mr. Ighile was on set Friday night presenting the popular Sports Tonight programme on Channels Television when he asked for a break and later demanded to be taken to hospital where he finally passed on.

Bode Oguntuyi, a close friend of the deceased and editor of futaa.com, could not utter a word when PREMIUM TIMES sought his comment on the death of Mr. Ighile, who until his death, was regarded as one of the most humble big guns in Nigerian sports journalism.

“Words have failed me, I am just numb,” Mr. Oguntuyi simply said.

Sports journalist, Kayode Tijani, another close associate of Mr. Ighile, admitted that the loss was a colossal one for the sports family.

On his part, Arowolo Jubril, the media officer for the Nigeria Premier League side, Shooting Stars of Ibadan, sent condolences to the family of the deceased praying for the repose of the soul of Mr. Ighile.

“The entire 3SC (Shooting Stars)family received with shock, the sudden death of a friend, Joe Ighile of Channels TV. We mourn him, share the grief with his immediate family, his organization and colleagues with prayers that God will accept his soul and grant the family the fortitude to bear the loss. May his soul rest in peace, amen” he said.

During his National Youth Service Corps, NYSC, period in Makurdi, Benue State, he received the chairman’s award at the end of his service year owing to his outstanding contributions to the Orientation Broadcasting Service (OBS) and also as a corps liaison officer at the NYSC secretariat.

He began his career in media at the Edo Broadcasting Service (EBS) as a content staff where he was involved in youth programmes in the early 80’s.

His versatility earned him a job with Disc Engineering, Ikeja, Lagos, where he was made the manager of broadcast in charge of local contents before he joined Channels Television in 2003 as a reporter/producer.

He was until his death the head of the station’s sports desk, and was responsible for all its sports programmes.

The widely travelled journalist was a winner of multiple awards and a member of the Nigeria Football Federation media and publicity committee as well as Sports Writers Association of Nigeria (SWAN).

He was married and blessed with two children.

UNICEF, WHO condemn killing of health workers in Kano