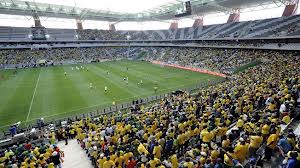 CAF said it has no plan to change its arrangements.

The Confederation of African Football, CAF, has insisted that it will use the Mbombela Stadium for a semi-final match in the ongoing African Cup of Nations, AfCON 2013.

The pitch at the stadium has been condemned by footballers, coaches and administrators as one of very poor quality. The Super Eagles, who played their first two matches at the stadium, also condemned the pitch.

The African football body, however, said it has no plans to remove the stadium as one of the semi-final venues.

“Plan A is Mbombela, so is plans C and B. The scheduled matches at the venue would hold as planned and we hope that the pitch continues to improve as we are working hard to improve on it. We, however, have no intention of moving the matches elsewhere,” CAF Secretary General, Hicham El Amrani, said while addressing journalists on Friday.

The CAF official also said the prize money for the winner of the African Cup of Nations remains $1.5 million (N225 million).

He said there was not going to be any increment to the announced sum.

“We always raise the prize money when we get more revenue and that has always been done in a proportionate manner. So we will carry on the way we are doing it now. That will not change,” El Amrani said at a press conference organised by CAF and the Local Organising Committee of the AFCON 2013.

Ghana was the first team to qualify for the semi-final on Saturday after beating debutants, Cape Verde, in the first quarter final.