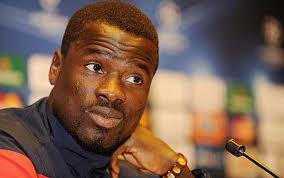 Eboue says Nigeria is no match for Cote d’ Ivoire.

Galatasary of Turkey and Cote d’ Ivoire defender, Emmanuel Eboue, is waxing lyrical on micro blogging social media site – twitter- asserting that the Super Eagles are no match for the Elephants of Cote d’Ivorie .

The West African football power houses are billed to face each other in one of the quarter final pairings of the South Africa 2013 Nations Cup; but the former Arsenal man through the twitter handle @TheRealEboue says it’s a no contest for the Eagles.

“Congrat to Nigeria. Don’t celebrate too much cuz we are coming for you. We are going to eat you like fufu” the first of his many tweets attacking the Super Eagles and Nigeria,” Eboue stated after the Eagles qualified for the quarterfinals courtesy of a 2-0 win over Ethiopia

Minutes later the Ivorian defender tweeted “Sorry guys, point of correction. We are going to eat Nigeria like #SuperFriedChickens.”

From then on, it has been an unending tweet tirade on not just the Eagles as a team but Nigeria in its entirety; a situation that has seen some twitter users arguing that Eboue is being impersonated.

“I see ppl saying I hv pride by saying we wud eat Nigeria like fried chickens, it’s not pride guys, it’s hardwork & passion 4 my country,” another tweet read from the handle supposedly for the Ivorian defender.

“@TheRealEboue: In Nigeria team, some of your best strikers like martins, yakubu & odewinge are not in the team. Why? No peace, passion, & humility”

“@TheRealEboue: Ivory has some of the top players in d world, and when our country calls. We go. We go back home and play. Nobody is a big boy. So shut it”

“@TheRealEboue: Ivory has some of the top players in d world, and when our country calls. We go. We go back home and play. Nobody is a big boy. So shut it”

“@TheRealEboue: A country where mikel obi is your best player & captain . Out of 150million people. You sure have a problem super chickens”

“@TheRealEboue: With all due respect 2 mikel, he is a good player but not Okocha,Samson,yekini,Oliseh, adepoju. Your football association is a joke”

“@TheRealEboue: When keshi was in Togo, he dropped adebayor. He is in Nigeria and drops the best player. He is a manger he shud be able to work on their ego”

“@TheRealEboue: Drogba, Yaya,kolo, Zakora, gervinho,KaLou, and myself and all other players. We are all the same. One unity and family. Country comes 1st”

“@TheRealEboue: Oh sorry Nigeria, I even heard your country owns the first African television and you cannot even televise the game to the masses”

“@TheRealEboue: You guys are jokers. Your institutions are comedy clubs. You have so many resources & man power yet you are always falling short.”

“@TheRealEboue: Keep fooling yourself and calling yourselfs the giant of africa. You are nothing but the soil of Africa we all work on now.”

“@TheRealEboue: If we don’t beat you in the game, it means you are lucky. But trust me, we are going to deal with you so much , you would be eating grass”

“@TheRealEboue: I have said enough on this matter. I was so angry. Speak to me when your national television can broadcast the game. Have a good day” the long tweets finally halted.

Update: Trial of Bamanga Tukur’s son, others for fraud to continue as negotiations stall