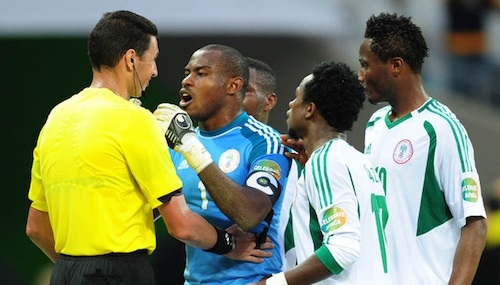 The referee gave some controversial decisions in the game.

The Egyptian referee, Ghead Grisha, who was at the centre in the Group C match between Nigeria and the defending champions, Zambia, in Nelspruit on Friday, has been sacked from the 29th Africa Cup of Nations, a top African football official has said.

Grisha hugged the headlines on the negative side when he awarded a highly controversial penalty against the Super Eagles four minutes from time, which enabled the champions to draw level in the game played at the Mbombela Stadium.

A top official of the Confederation of African Football confirmed on Sunday that the 36-year-old, who became an international referee in 2008, will take no further part in the on-going championship in South Africa.

“He has been sent home. He will have no further action at this Cup of Nations. His decisions did not tally with best practices of therefereeing profession and we would not allow anyone to start re-writing the rules of the game here,” said the official, who did not want his name disclosed as he was not authorised to speak.

CAF’s decision came as the Super Eagles settled down at their Hunters’ Rest abode in Rustenburg, ahead of Tuesday’s must-win final Group C clash with the Walya Antelopes of Ethiopia at the Royal Bafokeng Sports Palace.

Presidency steps up attack on Ezekwesili in “wicked stepmother” parable

Emir Ado Bayero’s flight to London and the second-class image of our ruling elite, By Adeolu Ademoyo