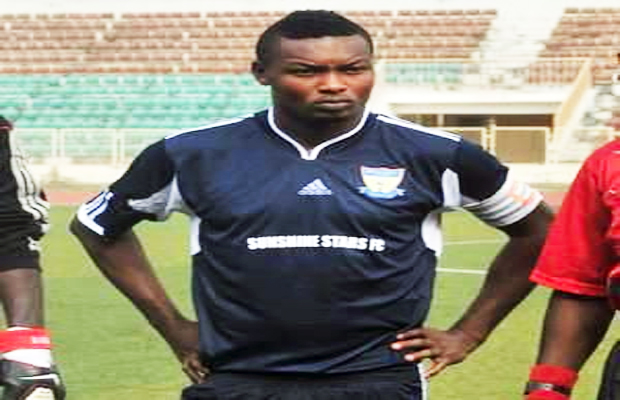 The coach spoke highly of the Nigerian defender.

Sunshine Stars Chief Coach, Abimbola Samuel, has said the Ondo State team is proud of its Captain, Godfrey Oboabona, for making the Super Eagles final list to the African Cup of Nations which kicks-off next weekend in South Africa.

He equally expressed confidence that the defender would make the first 11 of the national team line-up.

The Sunshine Stars Captain was named by Coach Stephen Keshi among other five NPL stars in the Super Eagles squad to the championship.

Speaking with journalists in Akure on Wednesday, Abimbola said Oboabona has made the team proud and equally confirmed its rating as one of the biggest clubs on the continent.

“Godfrey Oboabona is a captain we are very proud of. His strength, calmness under pressure and aerial prowess will definitely stand him in good stead to be among the first 11 players.

“We also expect him to be a good ambassador of Sunshine Stars and Ondo State by maintaining his disciplined character on and off the pitch,” the coach said.

He added that the sky would be the limit for Oboabona if he can maximise the opportunity offered by AFCON.

Godfrey Oboabona was first discovered some eight years ago when he featured for a local side in an under- 16 competition sponsored by then Ondo State Governor, Olusegun Agagu where he emerged highest goal scorer in the Olusegun Agagu Cup.

He later moved to the academy of the then Ondo State Football Development Committee (OSFODEC) where he became captain of the central team, Rising Stars.

The talented player later moved to Sunshine Stars Int’l FC and almost immediately became a permanent feature in the backline of the Premier League team.