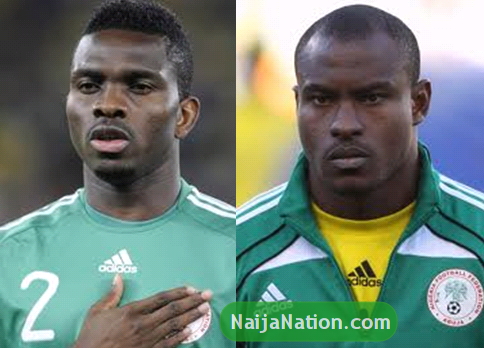 The players say condemnation can demoralize them.

Super Eagles skipper, Joseph Yobo, and his assistant, Vincent Enyeama, said Nigerian Football Supporters should refrain from condemning the team when they do not win games.

They players said the support of Nigerians is crucial to keep their morale high adding that there would sometimes be mistakes.

Yobo also denied reports that he is nursing an injury and may not be fit for AFCON. He said he is 100 per cent fit and ready for the championship.

“I must say Nigerians have been very supportive of the team but we need more, especially when things go wrong because it cannot be rosy all the time.

The media especially must always stand behind us so that our families will not be discouraged when they read negatives about the team”, Yobo said in Faro on Wednesday night.

“I also heard that they say I’m not fit but I have been very active all season for my club and the proof is there on the net for anyone to see. God has blessed me and no man can put me down not at this time of my career. Nigerians must unite behind the team for the goals to be delivered”, he added.

Enyeama in a similar vein said most of the players that have been labeled great achieved it because their compatriots and their media stood solidly behind them.

“It is very demoralizing. When a player makes a single mistake, the people stand up and start condemning such a player calling for his head.

“They forget the past when the same player saved the nation from defeat or was outstanding. We must always defend our own all the time, because that is the only way the Super Eagles can bring greatness to Nigeria”, he said.

Meanwhile the Head Coach of Cape Verde, Lucio Antunnes, has said the Super Eagles put up a gallant performance against his side and he expects the team to go far in the AFCON 2013 championship.

Antunnes, who spoke through an interpreter, declared that his boys met a very experienced Nigerian side and he was happy his team played out a draw.

He also promised that his team, the Blue Sharks, will cause upsets at the AFCON championship with the quality of players at its disposal.

We are not recruiting, don’t pay money into any account- FRSC