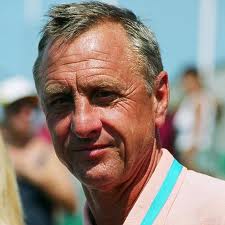 Cruyff congratulated the Nigerian side after the match against Catalonia.

Dutch legend, Johan Cruyff, who has adopted Catalonia as his home country, was full of praises for the Super Eagles display against his country on Wednesday in an international friendly at the home ground of La Liga side, Espanyol.

Also former Indomitable Lions of Cameroon goalkeeper and skipper, Thomas Nkono, said the rebirth of African football has started with what he saw the Eagles play against Catalonia selected on Wednesday in Barcelona.

Cruyff, who was handling the Catalonian selected side for the last time, said he told his players that the Nigerian side was a very strong, physical and tactical side and he was not disappointed with what he saw against his side.

Nkono on his part, came to the Eagles dressing room to personally congratulate Keshi for raising such a team from Africa and wished the team well at the South African AFCON championship. The towering former Espanyol FC first choice in goal, hugged, back-slapped and said he was fascinated by the display of the Africans in the exhibition game in the Catalan City.

On his part NFF President, Aminu Maigari, who watched the game live in the company of Technical Committee Chairman of the Federation, Chris Green, said that winning a trophy in far away Barcelona in only the second day of the year was a sign of good things to come in 2013. Maigari is scheduled to return with the trophy to Abuja, early Friday morning.

He urged the players not to relent in their quest for the AFCON title in South Africa, arguing that President Goodluck Jonathan has assured that all necessary support will be provided for an excellent outing for the team.

“The President even watched the game against Catalonia selected and he was very proud of you. We also on the part of the federation will ensure that adequate provision is made for you to conquer in South Africa,” he said.

Head Coach Stephen Keshi said he was happy at the display of the national team but was not totally done yet with building a strong team.

“In the next two weeks we should have a stronger and more reliable team to defend our colours come SA 2013” Keshi said.

The burden of souvenirs, and the fear of coming home, By Zainab Usman