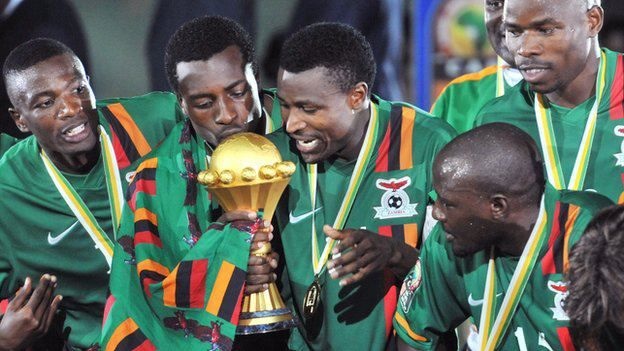 The Chipolopolo of Zambia are the reigning African Champions

The President said on Friday that the Confederation of African Football, CAF, award was a great achievement for the team that had also been rated second best by the World Soccer Magazine.

“You have stood tall among other great nations and that is a mark with which we have been known. Indeed, you have presented this nation with an early Christmas gift,’’ the President said in his congratulatory message to the national team.

President Sata pledged his government’s commitment to the development of sports in general and football in particular.

“Your achievements throughout the year have encouraged my government to invest even more in football, and the massive sports infrastructure development across the country is testimony to this,” he said.

Mr. Sata urged the team to continue working hard and build on the success to defend the pride of the country.

Zambia was on February12 crowned 2012 Africa Champions after defeating Cote d’Ivoire 8-7 on penalties in Libreville, Gabon.

The team also qualified for the 2013 Africa Cup of Nations to be held in South Africa, starting next month.

NDLEA arrests 114 suspects with 517.2kg of drugs in Niger