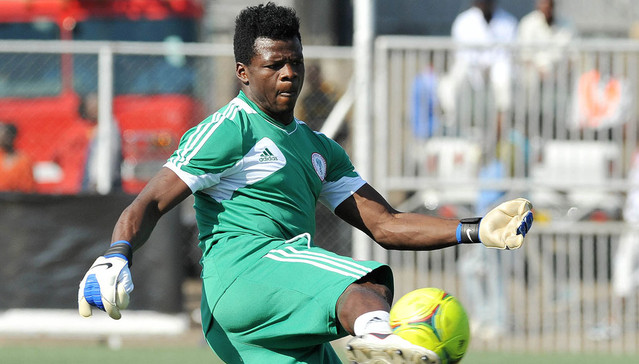 I can’t be distracted by clubs’ row, says Agbim

Goal Keeper Chigozie Agbim says he is ready for the Nations Cup.

Goalkeeper Chigozie Agbim, Captain of the home-based Super Eagles, said on Thursday that the dispute between his former and present club would not affect his preparation for the Nations Cup.

Agbim was reacting to complaints by Warri Wolves FC that Rangers International FC had not discussed his transfer with any official of the team.

He said in an interview that he is not bothered by the clubs’ squabbles, rather, the preparation for the 2013 African Cup of Nations, AFCON, beginning in January in South Africa.

The Eagles goal stopper said that the level of concentration in the team’s camp would not give any player the time to think of any other issue as the players were already dreaming of their trip to the Rainbow Nation.

“I know they will resolve the matter at the end of the day, so why should I be bothered?’’ Agbim asked.

He dismissed the belief in some quarters that the home-based Eagles’ might not represent the country well in South Africa if allowed to form the bulk of the team.

Agbim said he would regret nothing more than to have his name dropped in the final list.

“I am not worried about foreign based players taking all the chances in the team.

“Like the Big Boss will always say, there is room for every player to prove himself and to battle for a shirt.

“He is the coach, he knows what is good for the team and I know he will do the best selection; after all it was this same squad that won the match that qualified the country for the AFCON,” he said.

The goalkeeper said if he fails to make the team, he will only tell those that are selected to make us proud.

“Every Nigerian is expecting the team to win the trophy and we have started the preparation and by the grace of God, we will make Nigerians proud,’’ he said.

The 2013 AFCON is scheduled to hold from January 19 to February 10, in South Africa.

NSCDC deploys 10,000 officers to maintain peace in Abuja during Christmas