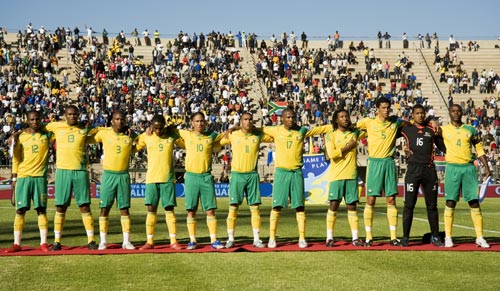 Top officials of South African football were mentioned in a match fixing scandal.

The South Africa Football Association, SAFA, has said the match fixing scandal rocking the association would not affect the preparation and hosting of the 2013 African Nations Cup.

SAFA Acting President, Mwelo Nonkonyana, told newsmen that a commission of enquiry, to be headed by a retired judge, would be set up to investigate involvement of its officials in the scandal.

The SAFA president, Kisten Nematandani, and four other top officials were suspended by the emergency committee of the association on Monday.

This was consequent upon the FIFA report implicating SAFA in match fixing of the Bafana Bafana warm-up matches ahead of the 2010 world cup.

Mr. Nonkonyana said suspension of the top officials does not imply that they were involved in the match scandal.

“This action in no way implies that these individuals were involved in match fixing,” he said. “It is simply for good governance that this measure is being implemented.”

They are expected to give evidence in the commission of enquiry.

Mr. Nonkonyana, who is the current Vice-President of SAFA, would serve as acting president in Mr. Nematandani’s absence, while Pinky Lehoko had been appointed interim CEO.

“This is a difficult situation for the association and for those who have been named in the report. We hope that there would be no speculation about their presumed guilt or otherwise.

“We need to allow the investigation to take place speedily and fairly, so those that are innocent can be separated from those who are not,” Mr. Nonkonyana said.

He said former CEO, Lesley Sedibe, and former head of referees, Steve Goddard, would be asked to give evidence at the enquiry.

SAFA said it had apologised to FIFA after “compelling evidence’’ was found that the results of the World Cup warm-up matches were fixed.

The FIFA investigation was conducted by the body’s former head of security, Chris Eaton, after a bogus football development company, Football 4U, provided referees for the warm-up matches.

The company was later discovered to be a front for an Asian-based betting syndicate headed by Wilson Raj Perumal, who was later convicted for match fixing.