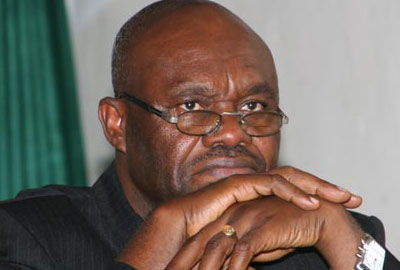 The NFF instructed the Nigerian leagues to commence their congress in 90 days.

The Congress had suffered various setbacks with the leadership of the NFF feuding and hatching plots to displace one another.

In attendance at the congress were former football administrators: Taiwo Ogunjobi; Bolaji Ojo-Oba; and the representative of the Confederation of African Football, CAF, and Federation of International Football Association, FIFA, Amanze Uchegbulam; all of whom are being prosecuted for misappropriating funds belonging to the NFF.

In his speech at the event, Mr. Uchegbulam said the NFF is free from sleaze.

“The NFF is not corrupt, they have been hard-working and have achieved so far since their inception at the office,” he said.

He said the people that accuse the NFF of being corrupt do so because “they are not close to the NFF and they do not know what they are facing. If they know they will appreciate the leadership and the magnitude of work that they are doing.”

Also in attendance were all board members of the Nigeria Football Federation; coaches of the national teams; a former Executive Secretary of the Federation M.A Kadiri; and football observers.

At the end of the Congress, the Federation commended themselves for all the qualifiers that were played and for the good performances shown in all international matches,

They ratified the decisions of the Nigeria Premier League Congress, agreed to lift the suspension of Bola Akinbobola, and to also send Ocean Boys Football Club to the National League instead of upholding their demotion by the outgone board.

They also set up a league management committee to chair all events at the Nigeria Premier League and ordered the league to start in January before the commencement of the African Cup of Nations.

The congress instructed the nationwide league and the women’s league to hold their congresses in 90 days.