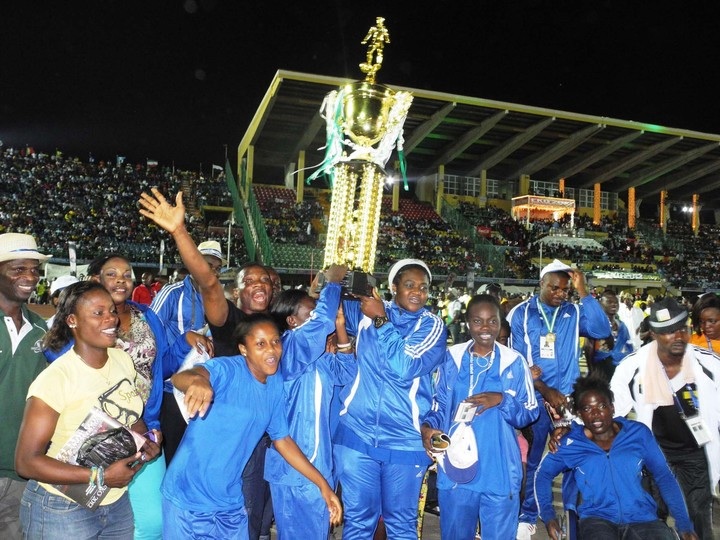 Delta wins big at this year’s sports festival which held in Lagos.

The 18th National Sports Festival which started 10 days ago across Lagos State, came to a thrilling end on Sunday, with Delta   State coming first and taking away the victory trophy.

Popular artistes like Tiwa Savage, Wande Coal, Whiz Kid, Seun Kuti and the Egypt 80 band held the sizeable crowd at the Teslim Balogun Stadium venue of the closing ceremony spellbound for the duration of the event. There was also several rounds of fireworks display which will go down as one of the best in the country in recent times

The Minister also commended the athletes for their resilience and for the spirit of sportsmanship demonstrated all through the game.

“I have been involved with the Nationals Sports festival right from the 16th edition in Kaduna and I must confess Lagos has raised the stakes with the near perfect organization of the games; the opening and closing ceremonies remain the talk of the town” the NSC Boss stated in his speech.

The Minister also went on to tell the athletes particularly those that distinguished themselves that they should be getting ready to represent their country at future international Games.

“I will like to tell the athletes that they should not rest on their oars as there are bigger challenge ahead” he siad.

On his part host governor, Babatunde Fashola, highlighted the positives drawn from the biennial Games.

Though Lagos finished third on the log, Governor Fasola said he was happy to see many talents being discovered from the games as that was the idea behind the games and not just winning.

Team Delta finished tops at the end of games and was handed the Yakubu Gowon trophy with the Delta Governor Peter Udaghan in attendance to celebrate with the state’s athletes.

Meanwhile Calabar, Cross Rivers State has been confirmed as the host of the 19th edition of the National Sports Festival.

Mr. Abdulahi handed the commemorative flag for the hosting to Hon Patrick Ugbe, the Sports Commissioner for Cross River state.

In his acceptance speech, Patrick Ugbe on behalf of Governor Liyel Imoke said Cross River will build on the successes recorded in Lagos.