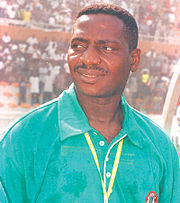 Best Ogedegbe’s widow wants her husband immortalized for his role in Nigeria’s football.

Nov.6.(PREMIUM TIMES) — No member of the Nigeria Football Federation was present at the third Memorial Lecture for former National Team Goal Keeper, the Late Best Ogedegbe on Tuesday.

The absence of the country’s football administrators did not take the shine off the well attended memorial lecture held at the Walan Hall of the D’Rovans hotel in the ancient City of Ibadan.

The families of the late Mr. Ogedegbe and Sports Writers Association of Nigeria, SWAN, Oyo State Chapter organised the memorial lecture in remembrance of the former Green Eagles goalkeeper.

The wife of the deceased, Folashade Ogedegbe, told PREMIUM TIMES she was delighted with the impressive turnout and calibre of those in attendance outside the NFF.

“I am very grateful to everybody that turned up for the memorial lecture; it shows that they have not forgotten Best even his death”. Ms. Ogedengbe said.

The widow pleaded with sports bodies to find a way to immortalise her late husband.

“It’s been empty promises for now, at a time Shooting Stars said they will have a tournament in his memory till now they have not,” Mrs Ogedengbe said. “We just want them to have something in place that will make his name live on after his meritorious service to his fatherland.”

The memorial lecture is about the only occasion put in-place in memory of her departed husband who passed away on 28 September 2009.

FIFA/CAF Instructor, Adegboye Onigbinde, was the chairman at the event while a team-mate of the deceased, Segun Odegbami delivered a paper in a lecture titled ‘Life After Football: The Road Roughly Travelled’.

The Deputy Speaker Oyo State House of Assembly, Babatunde Olaniyan, also graced the event as a special guest of honour while the Commissioner for Youth and Sports in Oyo State, Dapo Lam-Adesina, was also among the special guest including several generations of Shooting Stars FC.

Best Ogedegbe came into the limelight at the Nations Cup hosted and won by Nigeria in 1980 when he was chosen ahead of the popular Emmanuel Okala by Coach Otto Gloria who led Nigeria to her first Nations Cup Gold. He also represented Nigeria at the Moscow Olympics in 1980.

A recipient of the M.O.N., Best Ogedegbe was the first choice goalkeeper at IICC Shooting Stars (now 3SC) and was a member of the prestigious IICC squad that won Nigeria’s first continental laurel in 1976, after he proceeded to Abiola Babes of Abeokuta from where he retired from active football to begin a coaching career.

This is FEC agenda for Wednesday November 7