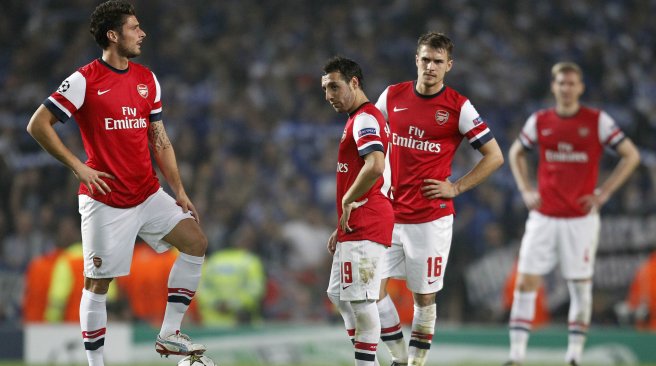 Many of Europe’s big teams lost to ‘lesser’ teams.

Arsenal, on Wednesday evening, slumped to a 0-2 defeat in the hands of German side, Schalke 04. The Gunners have now dropped to second in Group B, one behind Schalke , who became the first non-English team to win at Arsenal in a European tie for nine years. Dutchman Klaas-Jan Huntelaar got the first goal of the night as he rifled a shot past Vito Mannone with less than 15 minutes remaining on the watch. Arsenal, who had won their opening two games in the group, were made to look ordinary on the night by Schalke as Ibrahim Afellay sealed victory late on with the second strike.

Also in Germany, the jinx around Madrid continued as they were piped 2-1 by the German Champions, Borussia Dortmund. Polish striker, Robert Lewandowski, fired the hosts into a deserved 36th-minute lead having cashed in on a poor pass from Madrid defender Pepe. Real bounced back two minutes later courtesy of a skillful chip by Cristiano Ronaldo. But it was not enough as Dortmund reclaimed the lead from another goal from Marcel Schmelzer in the 64th minute.

In other games, Manchester City are bottom of Group D after a shock 3-1 defeat to Ajax in Amsterdam while a goal from Nigeria’s Brown Ideye was inadequate for Dynamo Keiv as they went down 3-2 to FC Porto in Portugal. Malaga stunned seven-time winners AC Milan when Joaquin made up for missing a penalty with the winner in a memorable 1-0 Group C win. Also first half goals from Zlatan Ibrahimovic and Jeremy Menez were enough for Paris St Germain to beat Dinamo Zagreb away and move the French side into second.

In the last duel of the night involving Nigeria’s John Utaka, an injury time winner from Kostas Mitroglu gave Olympiakos a 2-1 win over Utaka’s Montpellier and moved the Greek side into third on three points in the Group.