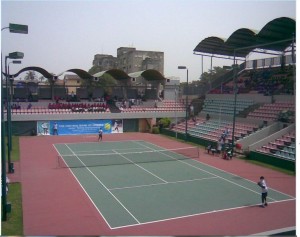 The gulf between Nigerian tennis players and their foreign counterparts was evident on Monday as the Main draws of the first leg of the Governors Cup served off in Lagos.

In the first round of the Main Draws of the biggest tennis tournament in the country, highly ranked Nigerian players were eliminated.

Nigeria’s number one player, Shehu Lawal, was a shadow of himself as he was defeated in straight sets of 6-0,6-2 by Spain’s Borja Rodriguez Mantano at the Lagos Lawn Tennis Club, Onikan.

Abdulmumni Babalola, ranked among the top five tennis players in , gave a better fight but was sent out of the FCMB Plc and Etisalat Nigeria sponsored tournament by an Italian, Alesandro Petrone, in another straight sets of 7-6, 6-4.

For little known Kehinde Alade, it was a tennis lesson gotten from Alesandro Bega, who defeated him, 6-1, 6-1 in another Men’s Singles game.

Nigerian female tennis players were not exempted from the first round defeat.

There was victory for a Nigerian though as Sanni Adamu defeated compatriot, Umaru Balami, 7-6, 1-6, 7-5 in the Men’s Singles.

In other first round results, Zarah Razafimahatratra of Madagascar defeated Kyra Shroff of India 7-6, 6-0.

Other matches of the first round will be decided Tuesday.

Okafor’s law and the rest of us By Collins Uma