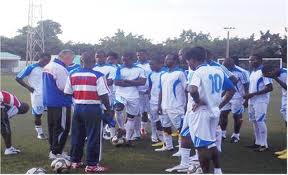 Nigeria and Liberia will slug it out on Saturday for a place at the 2013 African Cup of Nations.

After much dilly dallying, the Liberia Football Association, LFA, has informed the Nigeria Football Federation that their delegation to Saturday’s 2013 African Cup of Nations qualifiers will arrive on Thursday.

They, however, did not disclose the time of their arrival.

The letter from the LFA, which was received by Nigerian football authorities on Wednesday, simply stated that the contingent of 125 persons, comprising players of the Lone Star, technical and backroom staff, LFA officials, government functionaries, media representatives and supporters will storm Calabar in a chartered aircraft. The letter indicates that the Liberians are coming with a full house.

Nigeria played a 2-2 draw with Liberia in Monrovia on September 8.

Before now, the General Secretary of the Nigeria Football Federation, Musa Amadu, had expressed worry that the Liberia Football association refused to disclose its arrival date.

“I really don’t know what they (Liberia) are up to. They have not communicated their arrival date to us,” he said on Tuesday.

The Nigerian and Liberian team will slug it out at the U.S. Eugene Stadium in Calabar for a place at the 2013 African Cup of Nations in South Africa.