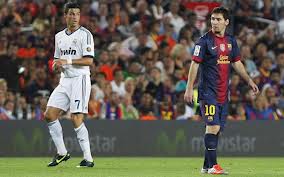 Two arch rivals, Lionel Messi and Cristiano Ronaldo, were the center of attraction Sunday evening as Barcelona and Real Madrid played 2-2 in their clash played at the Camp Nou.

Ronaldo and Messi scored all the goals of the night as each scores two goals apiece for the clubsides.

The draw means Real Madrid are still eight points adrift of their fierce rivals on the League table.

It was Jose Mourinho’s side who went ahead on 23 minutes. A pass from Karim Benzema found Cristiano Ronaldo on the left-hand side of the area, and the Portugal international smashed the ball past Victor Valdes at his near post.

Benzema should have made it two moments later, but his effort from close range hit the post.

Tito Vilanova’s side got back in the frail equalising just after the half hour mark. A cross from the right by Pedro, and a defensive mistake by Pepe, saw Messi tap in to make it 1-1 going into the break.

Both sides came out firing on all cylinders in the second half, but it was Barcelona that got the breakthrough first. Ronaldo got the chance to put Madrid ahead from a long range free kick, but blasted his shot into the defensive wall.

Messi wasn’t that wasteful, as he arrowed his own free-kick over the wall into the top corner with Iker Casillas having no answer, thereby putting Barcelona ahead 2-1.

Ronaldo would make up for his theatrics later, when he latched onto a sweet Mesut Ozil ball, to shoot past Victor Valdez, and draw Madrid level to end the game even at 2-2.

Orji Kalu’s party, PPA, blasts him for comparing self with Awolowo, Abiola