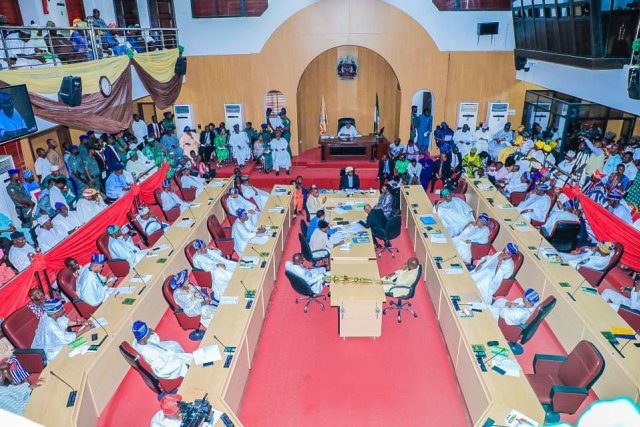 The Osun State House of Assembly has been hit by a crisis over Christmas gifts from the state governor, Ademola Adeleke.

The money was paid to the leadership of the assembly and was expected to be shared among the members.

A source within the assembly who requested not to be named for fear of victimisation, told our reporter that each of the lawmakers collected N250,000.

The assembly is dominated by the All Progressives Congress (APC) with 23 members while the Peoples Democratic Party (PDP) has three members.

But the cash gift sparked a crisis among the members of the assembly on the ground that the money shared to them was too small.

One of the aggrieved lawmakers, who spoke on condition of anonymity, told our reporter that some of them held a meeting on Thursday to discuss the issue.

The lawmaker said his colleagues were disappointed that the house speaker, Timothy Owoeye “cheated” them.

He said some lawmakers had begun to plan the impeachment of the Speaker.

The lawmaker also confirmed that he collected a share of N250,000 from the governor’s Christmas gift.

“We are just disappointed that the Speaker cheated us. Many of us did not even know the amount until recently. I also heard that some of them are planning to impeach the Speaker,” he said.

However, the Speaker’s spokesperson, Kunle Alabi, denied that the lawmakers were quarreling over any gift from Mr Adeleke.

Mr Alabi said the claim is “faceless and baseless.”

“There is nothing like that. Probably it is the figment of imagination of the originator. The allegation in the first place is not worth reacting to because it is faceless because the group or whoever is bringing up this allegation is faceless,” he said.

“If anybody is planning to impeach anybody, somebody must have spoken on their behalf so it is faceless, it is baseless, it is in the imagination of the people peddling it, there is nothing like that,” he added.