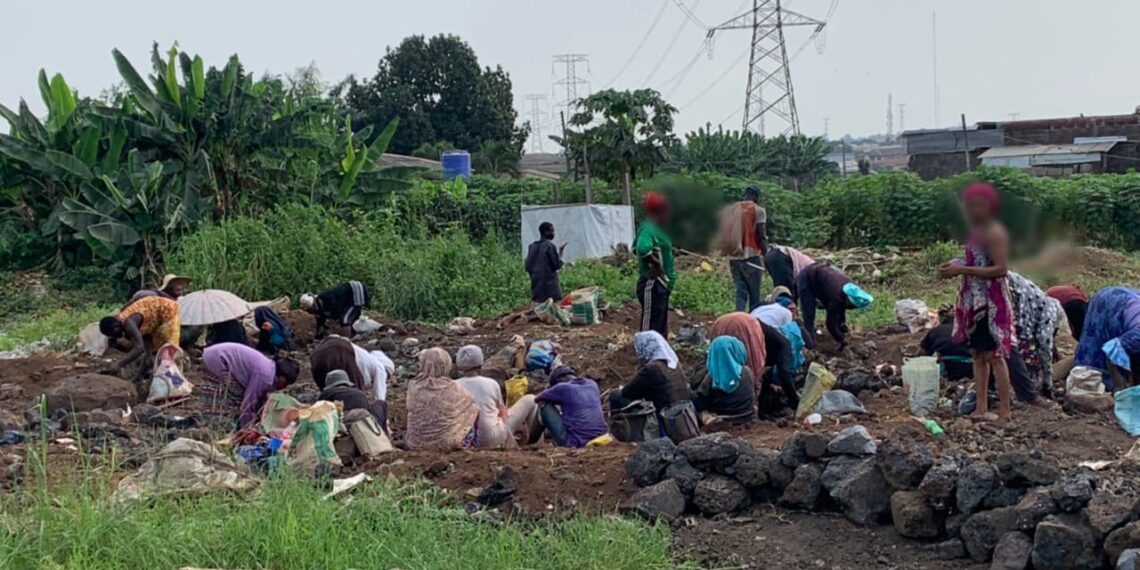 Women scavengers in Lagos say they are in their "dirty work" as a means of survival but experts say with a better policy in the recycling industry, government can help bring dignity and better reward to the work.

On a hot Monday afternoon in November, a truck full of recyclable metals pulled up at a dumpsite in Odonla, a community in the Ikorodu area of Lagos State. Among those waiting for the truck to unload was Chidinma Benjamin, a 38-year-old mother of four.

The blazing midday sun spared no one. While Mrs Benjamin and some of her colleagues took shelter under trees, dozens of other women kept digging into a pile of metal scraps at another corner of the field.

Mrs Benjamim had been introduced to scavenging after her life took a drastic turn.

She was selling foodstuffs at Ijaiye in Abule-Egba area of Lagos, until her husband was sacked from work during the COVID-19 pandemic. Frustrated, they had wanted to relocate to their village in Abia State, but a friend advised them that it was better to stay back in Lagos.

Since then, every day, she leaves home in a corporate wear but changes into her ragged work clothes at her ‘office’, she told PREMIUM TIMES. On the day the reporter met her at the dumpsite, she was sitting head in hands on a log of wood under a tree. Occasionally, she would raise her head to chat with Gladys, a co-scavenger who had become her chat partner in the last year.

A few metres away, dozens of other women wearing different headcovers were digging with mostly tablespoons through piles of waste in search of metal scraps. They were all bound together in the foul smelling environment by something more compelling – struggle for survival.

Others taking a break from the drudgery laid on a tattered brownish rice sack under another tree, while a toddler slept by their side.

From dawn to dusk, the group dug through wastes to collect metal scraps that they would exchange for money. The wastes are from nearby steel manufacturing companies. On the field, some people with higher earning power buy a truckload of metal scraps, usually filled with “big irons,” from the companies. They dig through it and collect the metals. When the pile is left with smaller metals, they sell them to the female scavengers at prices as low as N8,000.

The buyer, a female scavenger, sometimes acts as an employer of labour. She buys the ‘market’ and employs someone for about two to three days to work with her to collect metals from the wastes. The employee is paid N1,000 and also gets lunch daily.

Some of the scavengers may also team up to buy the truckload if the price is higher, work on it and share the profit when sold. However, they said, sometimes they don’t make any profit.

Many of the women scavengers consider the work demeaning but were thrown into it by the harsh economic circumstances of their families.

“The woman is like a pillar of the family, like the engine room,” Muda Yusuf, the immediate past Director-General of the Lagos Chamber of Commerce and Industry (LCCI), told PREMIUM TIMES.

Describing empowerment of women as a “good investment,” he said, “It is a very critical component of developing the economy and the society.”

There are many other female scavengers like Mrs Benjamin bearing or contributing significantly to the financial upkeep of their homes.

Before her interview with the reporter, one of the women lying on the sack, Blessing Bassey, also 38 and a mother of four, bought a cold bottle of soft drink from a shop in a nearby residential building.

“I want to relax but go on,” she said to this reporter as she gulped down the drink,

Mrs Bassey still owns a shop in her residential area where she sells groceries. She said her 12-year-old daughter supervises the shop after school hours while she is at work at the dumpsite.

“I have been doing this (scavenging) for two years,” she said. “I do it to support my children. My mother-in-law introduced me to the work after the COVID-19 lockdown.”

When she informed her husband about the alternative source of income, she said he he refused to give his consent.

“He didn’t accept. He asked ‘who will cater for the children?’ I begged him,” she recalled.

“Later, he accepted. I told him that in case he doesn’t bring money home, I will support the home with the work. He then said I must not put my children under the sun.”

Explaining the process at the dumpsite, Mrs Bassey said when the waste arrives from the companies, “we will wait, and they will pick the big irons, then they sell the remaining ones to us.”

“Those that buy the scraps from the companies would have booked it, then pay the boys (middlemen) before bringing it here.”

Sometimes, it takes two days to collect the scrap metals, depending on the number of people working on it and the size of the tipper truck.

Mrs Bassey had sustained injuries several times at the site but still prefers to dig the waste without protective gear.

“I have (a protective gear) but I am not used to it, so I don’t use it often. Once I am done, I use soap and antiseptic to wash my hands,” she said.

Mrs Bassey said the protective wears they use are socks, and ‘mallam scarf.’ “We rely on God for safety,” she said finally. 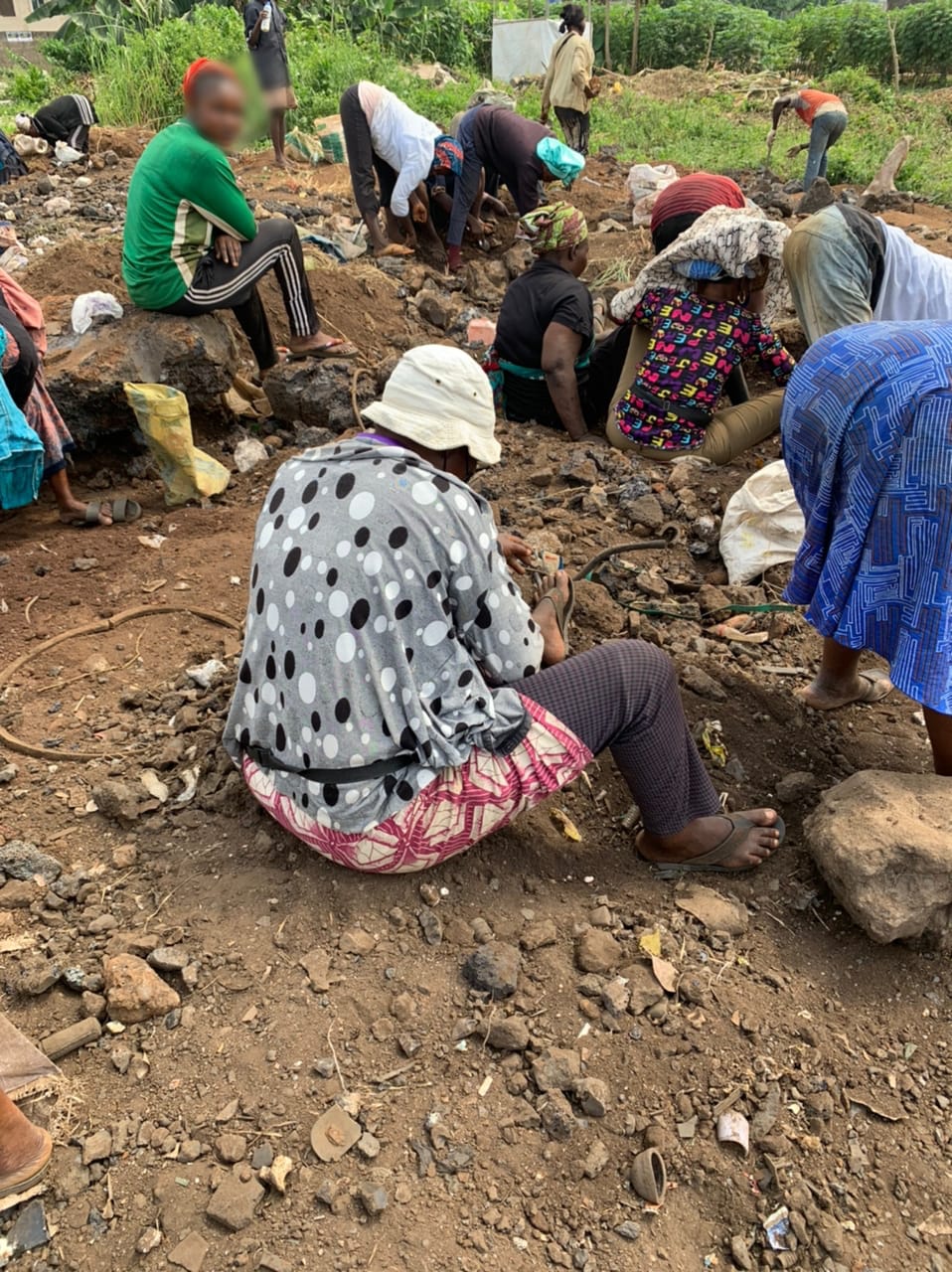 For Mrs Benjamin, after her family relocated to Ikorodu, she was introduced to scavenging by a church member and she ventured into it because, “there was no money at hand.”

It has been a “tough” experience for the mother of four.

“The first time I started, I earned N300 that day,” she said. “The sun was too much, I went back (home) and said what will I do again? I thought of stopping the work. But I picked up courage.

The sudden shift to being the bread winner of the home was hard, she said, her eyes misty.

Scavenging is not only for married women. Gift, 24, joined the scavenging world some months ago, after she was “sent” to the village by her ex-lover whom she had a child with.

“I went to the village and dropped my baby with my mother and came back,” she said.

She compared the job to working in a steel company. She said while a compamy pays about N15,000 monthly, scavenging guarantees her daily meal.

“This one, everyday, if you do not buy from the market, you can make N200, N500. But in the company, you will stay hungry till you receive the salary,” she said.

However, she noted that collecting metal scraps is “stressful.”

The required tool to work with depends on the size of the waste. “As you can see, those that use hoes are those working on that up one,” pointing towards three men collecting big scrap metals.

“We use spoons here. If you use hoes for this, you will pack all your market (metal scrap) and give those that did not buy the market.”

Mr Yusuf said a lot more gender specific incentives for women like Mrs Benjamin need to be put in place.

“Incentives around scavangers is to create opportunities for them to be able to offtake – have very good structured offtakers from whatever they are able to get and offer them good prices for whatever scrap or waste materials they get.

“If we are able to ensure that they get good returns from scavanging, we can even incorporate it into the whole discussion or conversation around environment, environmental protection, recyling, circular economy because environment issues now are becoming big issues.”

Mr Yusuf said if that is done, unemployment among women, particularly those at the bottom of the pyramid, would reduce.

Despite having to cater for her home and her “four princesses,” Mrs Benjamin still plans on having a fifth child, hoping that it would be a boy.

“If I should go for one more, God will answer me,” she said looking hopeful.

“You won’t understand,” she said when asked why she wanted a fifth child despite the hardship.

Many Nigerian women who already have female children, still want to have male babies.

Chief among the reasons for this is to “protect their marriages and cement their places in their husband’s heart.”

Mrs Benjamin would not state her reason for wanting a male child despite already having four female children amidst harsh economic conditions, but she is determined to continue to cater for her kids.

The metal scraps are in different categories which they listed as “gbegiri (iron with plenty shoe brakes, brows and copper), floor, stone market, ‘upwork,’” and others.

Despite the “cuts” on the body and the unpleasant odour at the dumpsite, Mrs Benjamin said that “there is money” in the work.

Amidatu Akinloye, 70, said she joined the women at the field to make ends meet.

“It’s not the kind of work that an elderly person should do,” she said.

“And it is not something that can be done on an empty stomach. Since I started today, I have not had anything to eat. I had no dinner yesterday, today too nothing.”

Mrs Akinloye started one year ago after she lost two children. The impact, she said, had a toll on her health and she had to relocate to Ikorodu from Ikotun where she used to trade.

“I sell antiseptic, disinfectant, soap, body cream, I hawk sometimes,” she said, describing how life was before the sudden turn.

The Septuagenarian said she usually picks ‘follow bag’ – leftover metal scrap – after her colleagues must have finished working on it.

Joining other women to till the earth in order to put food on the table is not an easy task, Mrs Gladys, Mrs Benjamin’s chat partner, told PREMIUM TIMES.

On her first visit to the field three years ago, she wondered what the women were looking for in the dirt. She said she eventually decided to do the work for the sake of her children.

“But what do we do now? In Nigeria, this is not the time to leave oga (husband) because oga is hustling,” she said.

“You have to do something as a woman who has children in the house,”

Asked how many kids she has, Mrs Gladys chuckled. “I born full house.” She later revealed that she has seven children.

But according to her, her children are not proud of her work, which they described as “dirty work.” 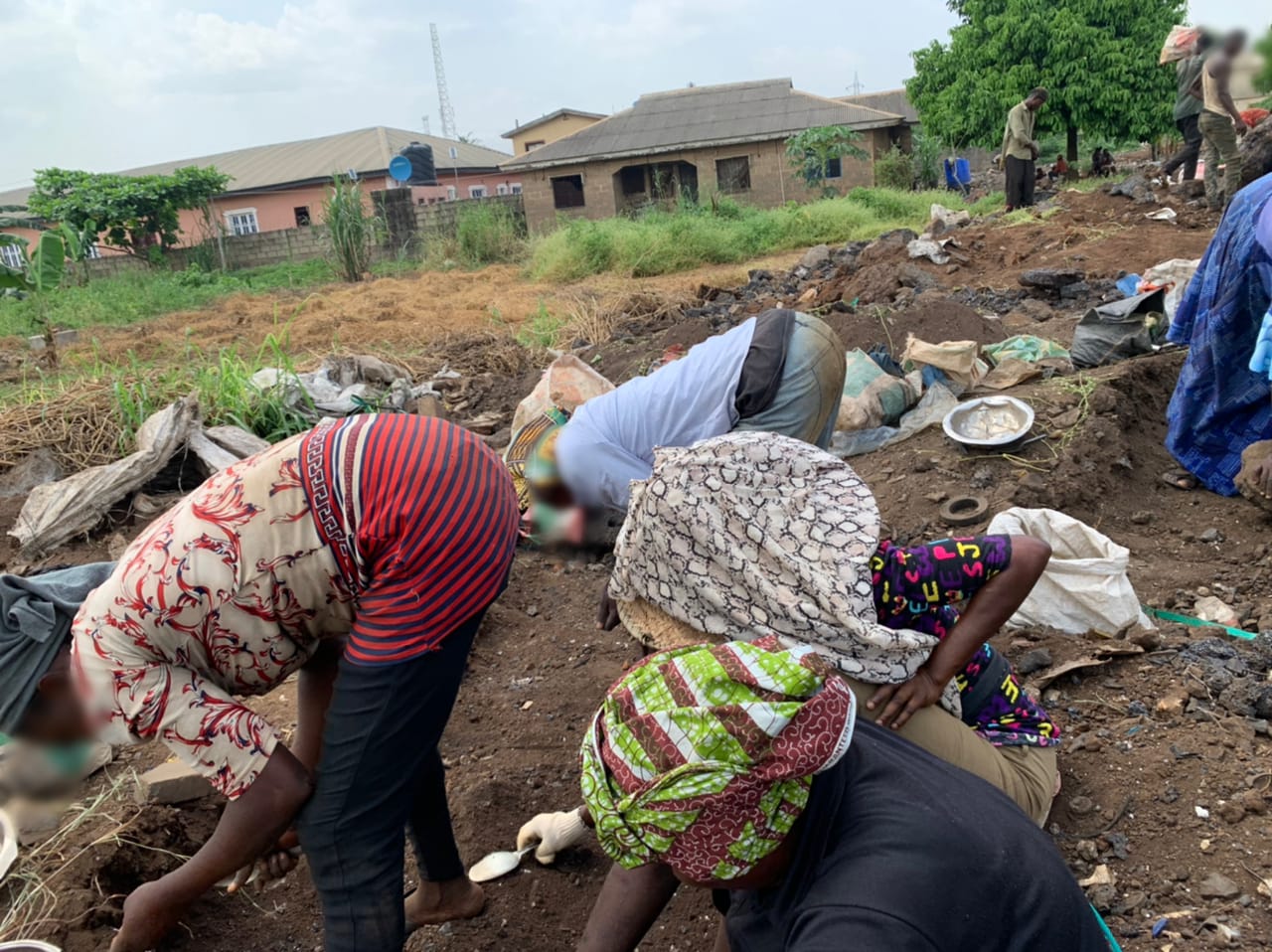 “Scavenging is considered dirty and demeaning and scavengers are forced to engage in the act due to the high level of poverty in the country,” said Ronke Ogunmade, a human resource professional.

She urged government agencies and private companies that benefit from recycling to train these women on how to build a career in the recycling industry.

“You can start from scavenging to having a recycle hub where you employ new scavengers to work for you,” she said. “And with the right policies that promote recycling, the industry can generate more jobs than we currently have.”

Tinubu speaks on reported London meeting with Wike, others

TF at 70: A meditation on nothingness, By Toyin Falola