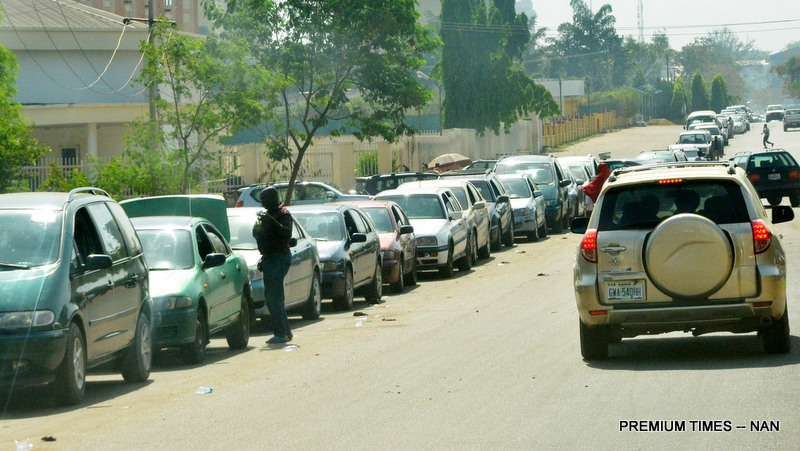 Most fuel stations in Ibadan sell a litre of petrol at between N180 and N250.

Motorists and commuters in Ibadan are having a hard time as gridlocks caused by fuel queues hinder free vehicular movement in the Oyo State capital.
Speaking with the News Agency of Nigeria (NAN) on Tuesday, Sanni Olatunde, an employee of a private company, said no-one had been able to explain the cause of the fuel scarcity.

He said the situation had been a source of concern as every aspect of work life had been affected.

“Fuel stations sell at different prices per litre of petrol and there is no regulator to enforce the official rate of N165 per litre.

“We are fed up because we have to queue for a long time to get petrol,’’ Mr Olatunde said.

Opeyemi Oyewole, a doctoral student at the University of Ibadan, said the scarcity had affected fares and further worsened the already bad economic situation of individuals.

“The amount of money I spend on transportation has increased by 50 per cent.

“It is also difficult to get commercial vehicles to one’s destination as most of them are either stuck in fuel stations or looking for fuel elsewhere.

“We hope a lasting solution will be found soon as the Yuletide period approaches,’’ Mr Oyewole said.

Also speaking with NAN, Mr Sola Famakinwa, another resident said he struggled to get fuel so as to be able to take his children to school as they had started sitting for examinations.

He said the situation was getting worse by the day and wondered why the government was not saying anything.

Chris Mimiola, a civil servant said he had been at a fuel station for upwards of four hours without hope of getting fuel.

“We just hope for a respite soon. Let the government come clean and make life comfortable for citizens.

“There is no electricity. Petrol that people use to power their generators is also getting out of reach.

“We need a speedy response from the government,’’ Mr Mimiola said.

Most fuel stations in Ibadan sell a litre of petrol at between N180 and N250. (NAN)