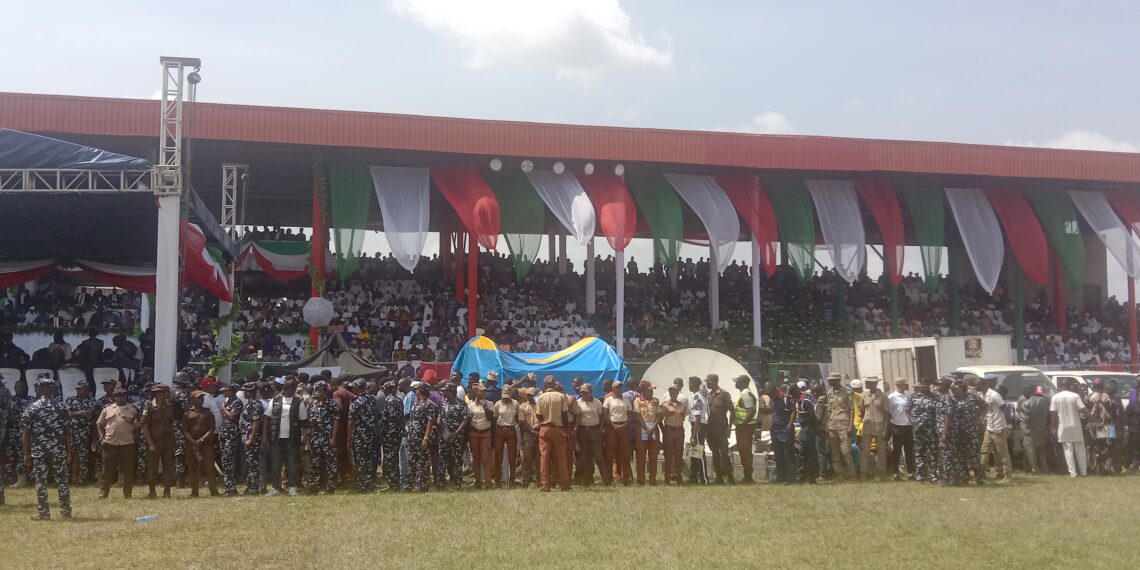 A section of the stadium filled with the supporters

Ademola Adeleke of the Peoples Democratic Party (PDP) has been sworn in as the 6th civilian governor of Osun State.

Ademola Adeleke of the Peoples Democratic Party (PDP) has been sworn in as the 6th civilian governor of Osun State.

Mr Adeleke took the oath of office around 11:47 a.m. The oath was administered by Oyebola Adepele-Ojo, the Chief Justice of Osun State.

Immediately after the governor took the oath of office, his deputy also mounted the podium where he swore his own oath.

Many leaders of the PDP including its presidential candidate, Atiku Abubakar, and national chairman Iyorchia Ayu were present for the inauguration.

However, the five governors of the PDP opposed to Mr Ayu were conspicuously absent from the inauguration.

Governor Nyesom Wike of Rivers, Seyi Makinde of Oyo, Samuel Ortom of Benue, Okezie Ikpeazu of Abia and Ifeanyi Ugwuanyi of Enugu were all absent at the event. The other four are loyalists of Mr Wike who lost the PDP presidential ticket to Atiku. They have since demanded the removal of Mr Ayu as chairman for peace to reign in the party.

Their absence and Mr Ayu’s presence suggest the new Osun governor will not be part of their G5 but is instead loyal to Atiku.

Other early arrivals before the inauguration were Titi Abubakar, wife of the presidential candidate of PDP, Atiku Abubakar; Ooni of Ife, Adeyeye Ogunwusi and the Oragun of Ila, Wahab Oyedotun.

Apart from Mr Emmanuel, two other serving governors later arrived to rejoice with their new colleague.

The two other governors are Douye Diri of Bayelsa State and Ifeanyi Okowa of Delta State who is also the vice-presidential candidate of the PDP.

Other PDP leaders that arrived just before the inauguration were a former presidential aspirant of the party, Bukola Saraki; former governor of Ekiti State, Ayodele Fayose and a businessman and banker, Tony Elumelu.

They all witnessed the swearing-in ceremony of the new Osun governor and his deputy.