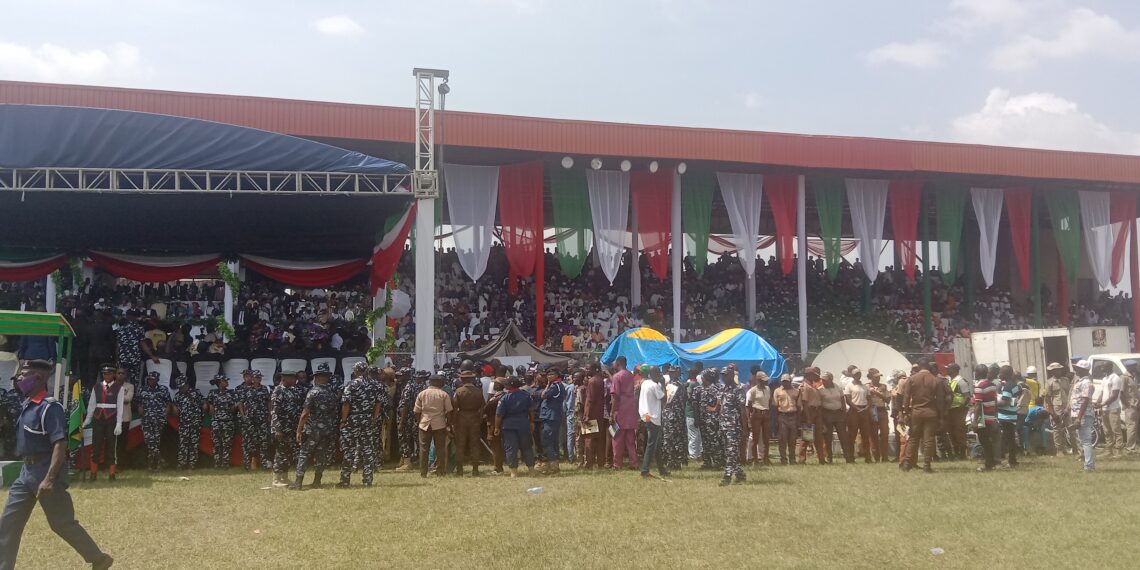 Thousands of supporters at the inauguration ceremony

Mr Adeleke, who arrived at the stadium around 11:25 a.m. was accompanied by his cousin, David Adeleke, popularly known as Davido, amidst heavy security.

Thousands of supporters of the Peoples Democratic Party have besieged the Osogbo township stadium for the inauguration ceremony of Ademola Adeleke.

Mr Adeleke will be sworn in as Osun governor today having been declared winner of the governorship election held in July in the South-west state.

He defeated incumbent governor Gboyega Oyetola of the All Progressives Congress who lost his second-term bid.

Although Mr Oyetola is still challenging the result of the election at the tribunal, Mr Adeleke would be sworn in as governor today.

The inauguration ceremony has brought thousands of PDP supporters from different parts of the state, which has caused gridlock along the road to the stadium.

The stadium was already filled to capacity as early as 10 a.m. before the arrival of the governor-elect and other dignitaries.

Mr Adeleke, who arrived at the stadium around 11:25 a.m. was accompanied by his cousin, David Adeleke, popularly known as Davido, amidst heavy security.

Mr Adeleke and others on his entourage were welcomed by thousands of supporters who defied the scorching sun.

With Mr Adeleke’s arrival, the inauguration ceremony began but hundreds of supporters were still struggling to find their way into the stadium.

Most of the supporters were dressed in purple coloured Ankara with face caps inscribed with the logo of PDP and a picture of Mr Adeleke.

As of the time of this report, Udom Emmanuel, governor of Akwa Ibom State, was the only PDP governor present at the inauguration.

Other dignitaries who were already seated were past governors, traditional rulers and chieftains of the PDP.

The traditional rulers present included the Ooni of Ife, Adeyeye Ogunwusi and the Oragun of Ila, Wahab Oyedotun.

Titi Abubakar, wife of the presidential candidate of the PDP, Atiku Abubakar was also present at the inauguration.