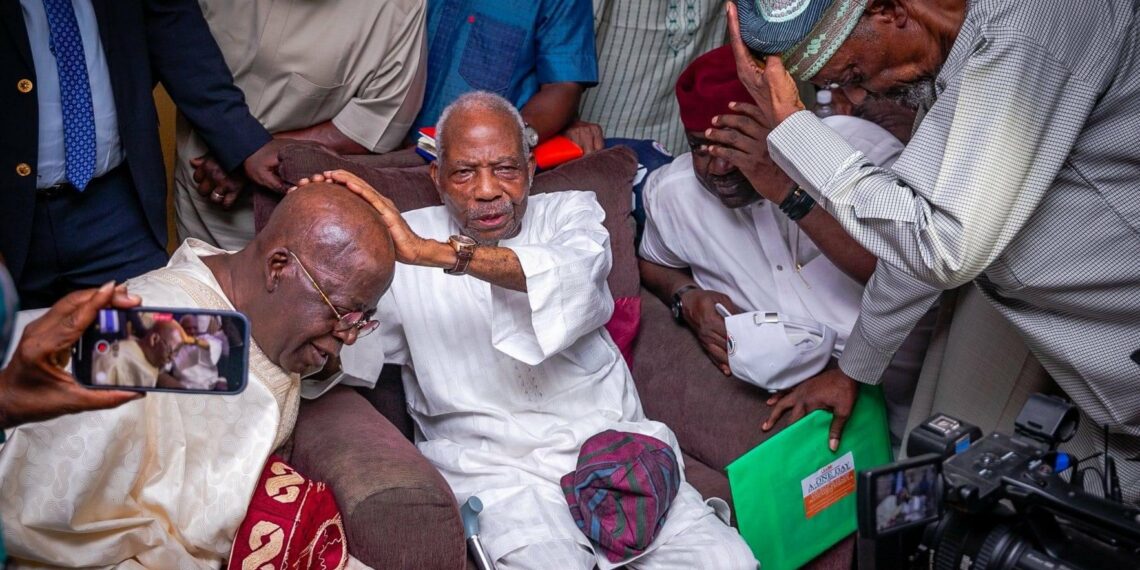 Mr Tinubu knelt before the nonagenarian who placed hands over his head and offered prayers.

Despite some misgivings in Afenifere about the candidacy of Bola Tinubu, the national leader of the pan-Yoruba group, Reuben Fasoranti, hosted the APC presidential candidate on Sunday and offered his blessings ahead of the 2023 poll.

The highpoint of the event, which was held in Mr Fasoranti’s country home in Akure, saw Mr Tinubu kneel before the nonagenarian who placed hands over his head and offered prayers.

Mr Tinubu’s visit to the Afenifere leader comes amidst commitments from some members of the group to support Peter Obi, the presidential candidate of the Labour Party, on the grounds of regional “fairness and equity.”

One of the leaders of the group Ayo Adebanjo had clarified that the decision to back Mr Obi was in line with the ideological and equitable principles of the group.

This was after Mr Tinubu had accused him of turning Afenifere into his ‘personal estate’ as Acting Leader.

Mr Tinubu was received at the airport by the Ondo State deputy governor, Lucky Ayedatiwa; the state chairman of the party, Ade Adetimehin; and other leaders of the party.

During the courtesy call on Sunday, Mr Tinubu told his host that he had visited him several times in the past.

His last visit was in July 2019, when he came to commiserate with him over the death of his daughter, Funke Olakunrin, who was ambushed and killed by gunmen on her way to Lagos.

READ ALSO: Why we are supporting Peter Obi – Afenifere

He admitted that there were disagreements among members of the group, but said given that democracy is a game of numbers, it was necessary to be “strategic” and “tactical” to be able to win the presidential election next year.

He said he needed the votes of the South-west and a sizable part of the north to emerge victorious as it was in 2015 and 2019.

He thanked Mr Fasoranti for providing formidable leadership in the South-west.

“Our leaders have been through this path, you Les us through it, we will follow you through it,” he added.

Mr Tinubu is expected to present his Action Plan Document on how to reposition the country to a larger Afenifere leadership later.

2023: ‘Presidential election is between Peter Obi and others’ – Kenneth Okonkwo