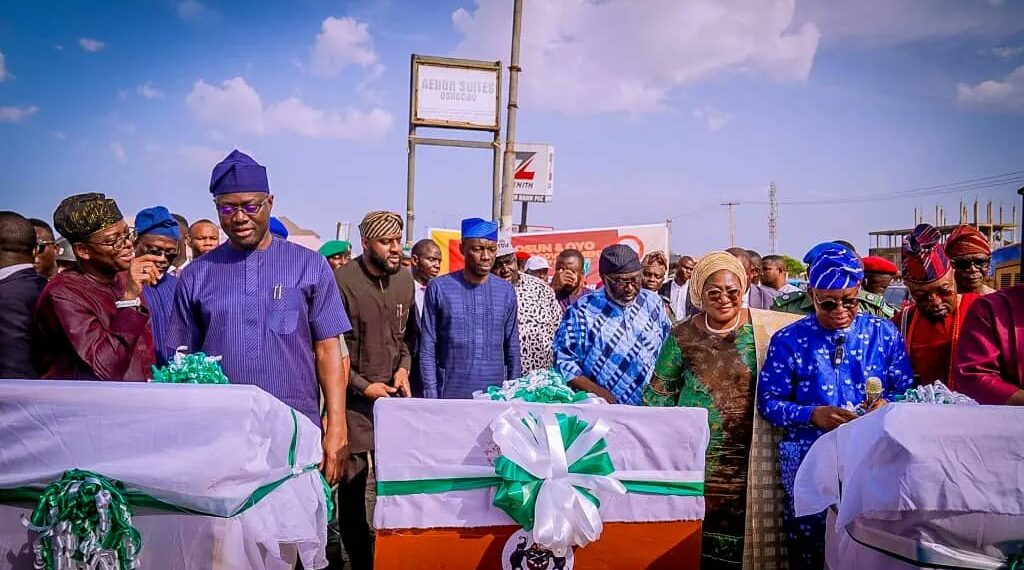 Mr Oyetola says the award of contract for the Osogbo-Iwo-Ibadan road is another promise fulfilled.

Osun State Governor, Adegboyega Oyetola, and his Oyo State counterpart, Seyi Makinde, on Thursday, flagged off the total reconstruction of the 91km Osogbo-Iwo-Ibadan road that has been in deplorable condition for years.

The governments of Osun and Oyo States had recently, jointly awarded the reconstruction of the road to put a permanent end to the untold hardship faced by motorists and other road users.

This is even as Governor Oyetola declared that by the special Grace of God he would be the one to commission the project when completed. The road project is expected to be completed within 18 months.

The Osogbo-Iwo-Ibadan road, which is said to be of economic importance to both states, links Ibadan, the Oyo State capital and Osogbo, the Osun State capital via different towns and villages, including the ancient town of Iwo.

The road which commences at the rotary intersections connecting it with the Lagos-Ibadan on Ibadan-Iwo-Osogbo and Ibadan-Oyo Highways, was inherited by the two states at the creation of Osun from old Oyo State in the year 1991.

The Osogbo-Iwo section had hitherto been in a bad state, wasting man-hours and constituting huge socio-economic malaise to the two states, especially given its status as the shortest route to Ibadan.

Many observers have lauded the decision of Governors Oyetola and Makinde to work together to fix the road, notwithstanding their political affiliations, describing it as an encouraging development and a clear resolve to separate politics from governance.

Another history was made today as I and my brother in Oyo State, Governor @seyiamakinde flagged off the reconstruction of the 91km Osogbo-Iwo-Ibadan road. A road inherited by the two states at the creation of Osun from old Oyo State in the year 1991. pic.twitter.com/wunSU78Vhd

Speaking at the flag-off ceremony in Osogbo, Governor Oyetola said his administration considered the road project as of utmost importance, noting that the award of the reconstruction of the road further demonstrates his government’s commitment to the infrastructural development of the State and wellbeing of the citizenry.

He added that the flag-off of the Osogbo-Iwo-Ibadan road project represents another fulfilment of his electioneering promise to the citizens of Osun, particularly Iwo people.

Mr Oyetola disclosed that the road contract was awarded through the e-procurement process as contractors who had shown capacity to deliver within specifications were allowed to bid for the contract.

According to him, the award of the Osun section of the road contract, measuring about 55km was done through a transparent bidding process which saw Messrs Peculiar Ultimate Concerns Limited, having polled the highest number of points, awarded the contract at the sum of N11,309,932,939.00.

He stated further that the reconstruction of the Osun section of the Osogbo-Iwo-Ibadan road will be completed within 18 months as it is equally expected to be executed under two main segments.

“The Dele Yes Sir Roundabout and the islands shall be adorned with a spectacular landscape that will bring out the beauty of Osogbo as the capital city of Osun and the home of culture.

“The second segment which shall begin from the Sawmill (Ido Osun) and end at the Oyo State Boundary, with a total length of 52.6km, shall be of Single Carriageway with a width of 7.3m and 1.5m width hard shoulder. This leg of the road shall also make provision for adequate hydraulic structures with thorough treatment of the problematic sections by the provision of filter bed, removal of unsuitable materials, and improvement of the vertical alignment of the road.

“In general, the Osogbo-Iwo-Ibadan road, which has the best alignment in the entire South-West shall be completely overlaid after all the necessary problematic sections had been treated.

“This road project will no doubt further boost the socioeconomic activities of our dear State, especially because it is an addition to the massive road networks our administration had unleashed on the State. It is our hope that the immediate benefitting towns and other parts of the State will take advantage of the road for personal economic gains”, Oyetola added.

In his remarks, Governor Makinde of Oyo described the Osogbo-Iwo-Ibadan road project as a revolution aimed at strengthening the bond of unity and cohesion between Oyo and Osun states.

Mr Makinde disclosed that N12.5billion will be expended to reconstruct the section of the road belonging to the State, saying that with what Osun will spend, the two states would spend a total of N24billion on the project.

He lauded the collaborative effort of Governor Oyetola in advancing the cause of the state since his assumption of office.

Earlier today, we were in Osogbo for the official flag-off of the Ibadan-Iwo-Osogbo Road project. I thanked my brother, H.E. @GboyegaOyetola for his collaboration with our admin, both on the Ladoke Akintola University of Technology (LAUTECH) ownership and this joint road project. pic.twitter.com/1JGfQGw1T4

“Today, I am here to say a single world. This is a revolution that is happening in Southwest Nigeria as it is yet another time history is made. I believe strongly that what we are witnessing today is actually a revolution. This is because the road in question was constructed by the Western region government of late Obafemi Awolowo. We thank God that another history is made by Governor Adegboyega Oyetola and myself.

“This revolution has led us to changing the formal way of doing things. In the past, states did their things separately but now we are pursuing collaboration with our sister states.

“We started with one of the biggest collaboration that led to the establishment of Western security network codenamed Amotekun, this happened because we put our people first. Also, just recently, we celebrated another one that put us together and Oyetola was part of the history on the joint ownership of LAUTECH.

“So, I am joining Oyetola, and together today, we are making history. We will be linking our dear states with road projects. I need to acknowledge the fact that we both demonstrated the fact that politics should be put behind while governance and people’s interest must be given priority.

“The revolution we are leading is a revolution of thought, ideas and we are saying governance must top history by putting the interest of our people first.

“This is the revolution we are talking about. This latest collaboration will come with dividends of democracy that will enhance trade and commerce. With its completion, we are saving lives and times of people traveling through Osun to Oyo and indeed we are putting money into the pocket of our people,” Makinde said.

Speaking on the specifications and socioeconomic benefits of the road to the people of Osun, the State Commissioner for Works and Transport, Remi Omowaye, said residents of Osun State, most importantly motorists, stand to gain a lot from the project.

Mr Omowaye, who commended the two state governments for their swift response and collaboration resulting in the successful flag-off of the road construction, assured that Osun would do everything to meet up with the specifications by deploying necessary mechanism to achieve the set objective.

Also, Oyo State Commissioner for Public Works and Transport, Prof. Daud Sangodoyin, said the state decided to embark on the reconstruction of the road, having been convinced of the socio-economic benefits the people of the state stand to gain.

According to him, the 35.6km section of the road belonging to Oyo State, when completed, would go a long way to stimulate the economies of the two states, enhance regional integration, strengthen security collaboration as well as boost socioeconomic activities and agribusiness.

SOURCE: Office of the Chief Press Secretary to the Governor of Osun State.