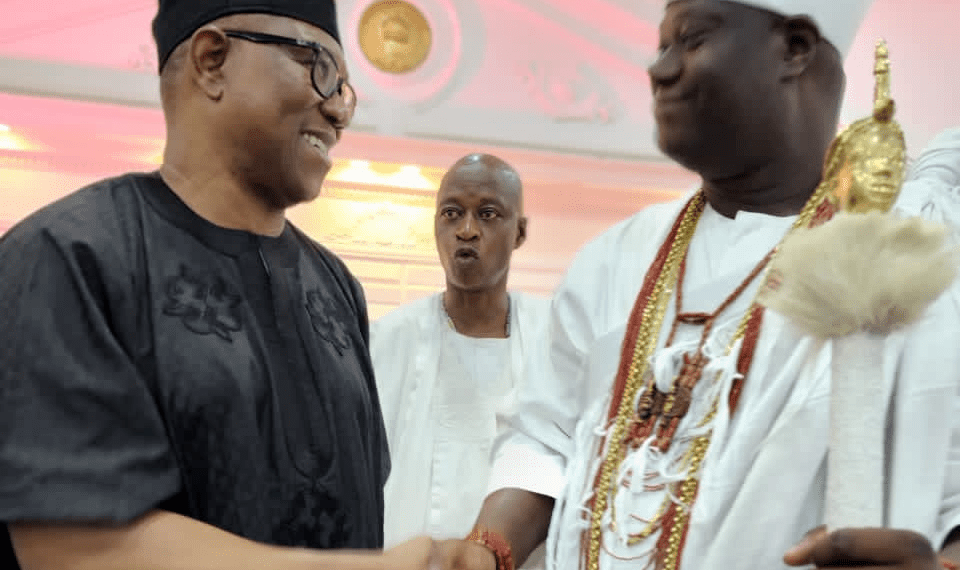 Mr Obi said he will explain the reason he started "the movement" when campaigns officially kicks off.

The presidential flagbearer of the Labour Party, Peter Obi, and his running mate, Datti Baba-Ahmed, have on Tuesday visited the Ooni of Ife, Adeyeye Ogunwusi.

Mr Obi said he had gone to the monarch on a private visit, adding that when the campaign kicks off, he will tell the reason he started what he called “the movement.”

“This movement is a simple movement, it is a movement for the youth to take back their country. A movement that will go a long way to show how things are going wrong in our country,” he said.

“We can’t continue to live in a country where we have overtaken India when it comes to infant mortality.

“A country where human lives make no importance again, where anybody can be kidnapped at any time… we can’t continue that way.”

In the last couple of months after emerging candidate of the party, Mr Obi and his running mate have continued to visit notable Nigerians over their 2023 presidential ambition.

The Labour party candidate had visited the duo of former President, Ibrahim Babangida and former Head of State, Abdulsalami Abubakar in their Minna, Niger State homes.

Mr Obi had, on Monday, shared a picture of his meeting with former President Olusegun Obadanjo, at an undisclosed location, weeks after the labour party candidate met the former President in the United Kingdom.