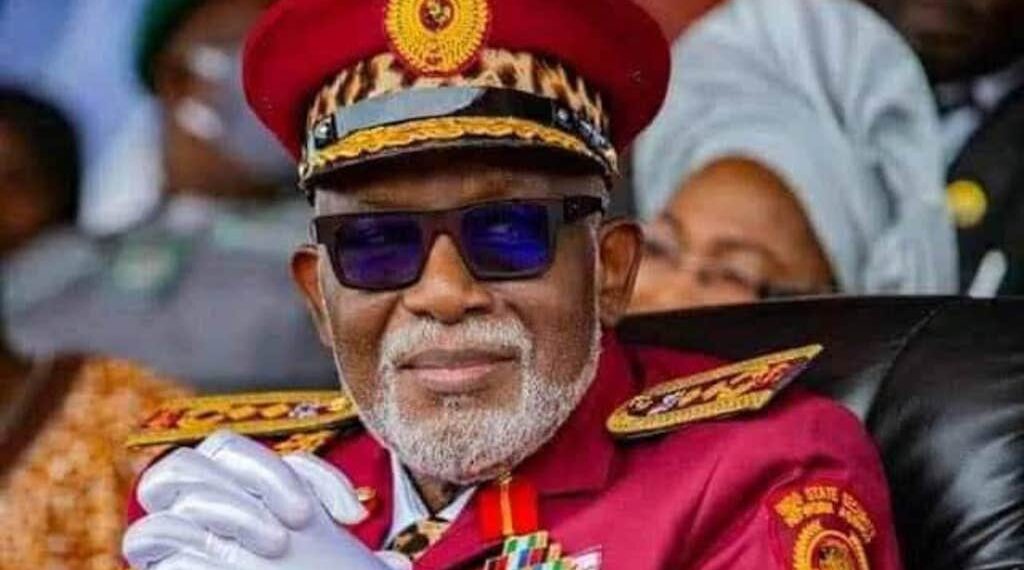 In light of the controversies over the arming of subnational security agencies in the country, the Governor of Ondo State, Rotimi Akeredolu, has renewed his commitment to providing adequate equipment for the state’s security network, Amotekun.

The governor said on Monday that the Amotekun Corps would be armed as backed by law, otherwise, the training would be inadequate and the lives of the “great patriots” would be placed in danger.

Mr Akeredolu spoke during the passing out parade of Courses 3 and 4 of Amotekun Corps.

He had last week stated that he would be acquiring sophisticated weapons for the outfit to protect his people, and chided the Federal Government for approving the same for Katsina State while depriving Amotekun of the same privilege.

The Northern Elders Forum described the move as illegal and unconstitutional, saying the governors were taking advantage of the gaps in the nation’s security situation.

Hakeem Baba Ahmed, who is chairman of the forum, while speaking in an interview with Channels TV on Sunday, said the failure of the federal police had resulted in the current situation and accused Mr Akeredolu and other state governors of playing to the gallery.

But Mr Akeredolu, at Monday’s ceremony, said he would continue to support the operational capacity of all security agencies in the state both in terms of equipment and the welfare of their personnel.

He said the passing out ceremony was a reminder of the need to strategise and tackle the current security situation, which he said had been left to snowball into existential crises across Nigeria.

“The Western Nigeria Security Network, Amotekun Corps, as a response, is now not just the first line of defence, but the ultimate bulwark in the protection of a way of life,” he said.

“The efforts of our determined and valiant Amotekun personnel since inception must be underscored, encouraged and highly commended. We must all rise at this time to acknowledge their efforts.

“On our part, we will continue to support the operational capacity of all security agencies in the State both in terms of equipment and the welfare of their personnel.

“The recent donation of 50-fitted patrol vehicles is a testament to our resolve to be up-to-date in fighting crime and criminality because, without a secured environment, there can never be visible and sustained development.

“It is not only absurd but also a dereliction of duty and a cause of disaffection. Dissatisfaction is induced by a feeling of unfairness. The crisis in conventional wisdom is life-threatening and nationwide. Therefore, it is unacceptable if the state sanctions differing rules of engagement for different sub-national governments.

“Those passing out today have undergone rigorous training at great expense to the state. The training will not end here, it will be continuous. However, no amount of training will mask the debilitation of fighting with one arm tied against implacable foes.”

He also urged those passing out to take their work seriously, do well and have zero tolerance for bribery. He said they should ensure prompt response to distress calls, and avoid abuse of power as no form of misconduct would be tolerated.

The Ondo State Commander of the Amotekun Corps who doubles as the Special Adviser to the Governor on Security Matters, Akogun Adeleye, noted that the new recruitment would help strengthen the corps in combating the terrorist dimension of attacks in the state.

“This arrangement is no doubt a novel initiative spare headed by Mr Governor himself, the strategic measures to combat the terrorist dimension which insecurity has ensued,” said Mr Adeleye.

“The event of Sunday, June 5 this year at St. Francis Catholic Church, Owo is still one that we hope and pray doesn’t happen again. We hope to use this recruitment exercise to strengthen our intelligence gathering capacity so that hands are nipped at the board before it is carried out.

“We will continue to explore areas of mutual benefit with sister security agencies in our quest to raise the bar of safety in the land. Mr Governor, very eminent personalities present here, I wish to take this medium to highlight some of the milestones we have attained between last year and now.”

The passing out parade, which took place at the Gani Fawehinmi Freedom Arcade had in attendance, the Speaker of the Ondo State House of Assembly, Bamidele Oleyelogun, House of Assembly members, local government chairmen, commissioners, royal fathers, head of security agencies among many others.