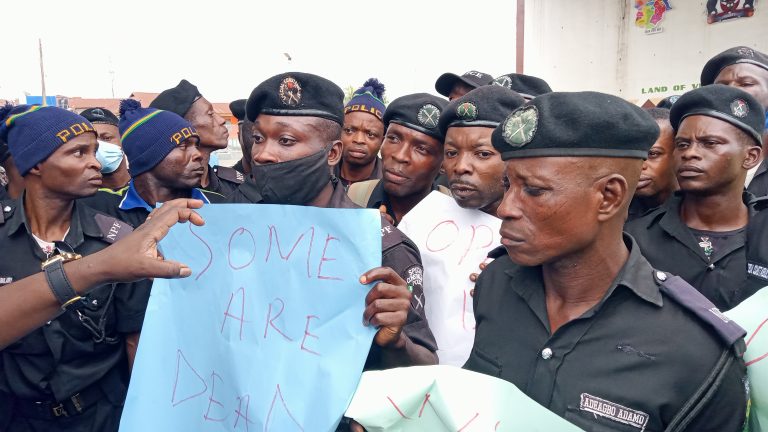 The protesting constables in Osogbo

Some of the protesters told PREMIUM TIMES that their "wives have been snatched because of their inability to provide for their families."

The police special constabularies in Osun State on Wednesday staged a peaceful protest over the non-payment of 18 months’ salary.

The constables gathered at the Oke-Fia roundabout and moved through Alekunwodo to the Olaiya areas of Osogbo, the capital of Osun State.

They were dressed in the police uniform and carried placards with inscriptions like “Pay us now,” “We’re dying,” We’re hungry,” “18 months no kobo,” “Okada riders are sleeping with our wives,” among others.

Some of the protesters told PREMIUM TIMES that their “wives have been snatched because of their inability to provide for their families.”

The constabularies said they were committed to their duties despite the fact that they were not paid.

Tijani Adewale, one of the aggrieved constabularies, said three of his colleagues have lost their lives in the course of discharging their duties.

“We lost three persons in Ikire and one in Iree. These people died in the course of discharging their duty,” he said.

“We are very dutiful despite the fact that we have not been paid a dime. Due to unpaid allowances, tricycle and Okada riders have snatched our wives because of inability to take care of them,” he said.

“We have gone to the local government, honourables, and dignitaries and yet nothing is done.”

Ibrahim Adenekan, a father of two, said he could not take care of his family because he had not been paid for 18 months.

“I have two children and a wife. I have not been able to provide for their needs since I started working. What is the essence of working? They should just pay our money, that is what we want,” he said.

Another constabulary, who preferred not to be named, said he escaped death when a gang of armed robbers attacked him and his colleagues.

“We are dying. We spent so much at the College. I have children but it’s 18 months now since I have not been paid,” he said.

ALSO READ: Osun 2022: We are yet to receive our election duty allowance – Police officers

“Four of us have been killed by armed robbers during attacks in Ikire, Iragbiji, and others. We want our money.”

Adewale Olokode, the Commissioner of Police in the state, who addressed the constabularies, urged them to send their grievances through appropriate channels rather than staging a protest.

“As far as you are wearing this uniform, we expect you to maintain a high level of discipline as a force man.”

Yemisi Opalola, the police spokesperson in the state, told PREMIUM TIMES after the protest that the police authorities are in a meeting with the constabularies to resolve the crisis.

“Talk to you later. In a serious meeting with the Commissioner of Police, management team and the constabularies,” Mrs Opalola said.

Last year, the constabularies in Ekiti State also protested the non-payment of their salaries for nine months.