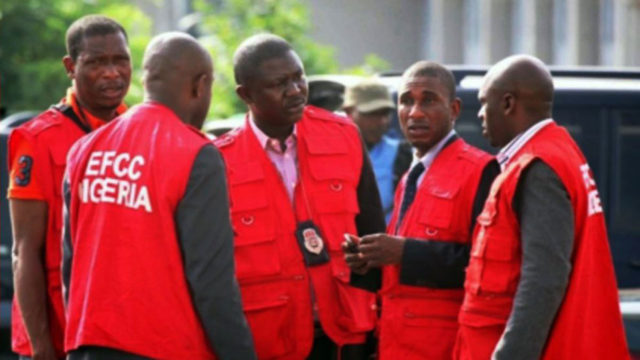 The Speaker is expected to return to the EFCC office on Monday.

The Speaker of the Ogun State House of Assembly, Olakunle Oluomo, who was arrested by the operatives of the Economic and Financial Crimes Commission arrested (EFCC) on Thursday has been granted bail.

A source at the Ogun Assembly told PREMIUM TIMES that the operatives picked up Mr Oluomo to answer questions bordering on alleged financial misappropriation.

PREMIUM TIMES had reported that the Speaker is currently enmeshed in a financial scandal which is currently being investigated by the anti graft agency.

The Assembly accused both Mr Kadiri and the agency of connivance to witch-hunt the legislators.

Meanwhile, a source in EFCC, told PREMIUM TIMES that the Speaker was released around midnight Friday on the condition that he returns on Monday with both the assembly clerk and the accountant.

On Thursday, the Chairman of the House Committee on Information in the Assembly, Yusuf Adejojo, said the lawmakers suspended sitting until further notice “due to one reason or the other.”

Mr Adejojo (APC, Abeokuta South I) claimed that the decision to suspend the sitting had been made before the arrest of the Speaker on Thursday morning.

Meanwhile, there was a rumour that the lawmakers suspended their sitting because the Assembly mace (symbol of authority) was with the Speaker.

Phone calls to the Speaker’s line on Saturday were not picked. On Thursday and Friday, the lines were switched off.

“I am there as we speak. An unplanned praise and worship was held earlier today by his supporters and the leadership of CAN in Ifo local government,” Mr Adeleye said.