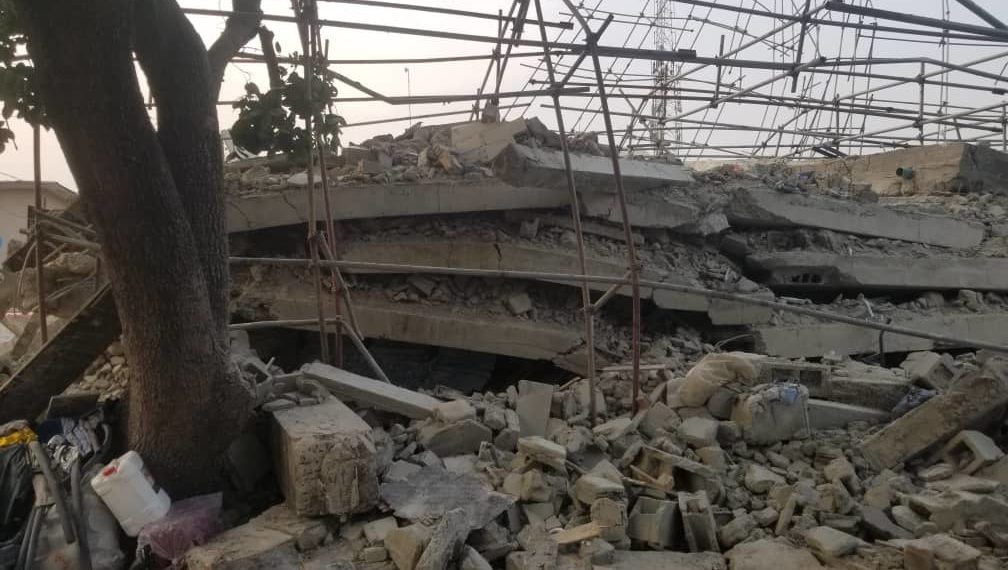 File photo from a site of the collapsed building in Lagos. PHOTO CREDIT: PREMIUM TIMES

Two children have died following the collapse of a building in Bariga, Lagos.

The Lagos State Emergency Management Agency (LASEMA) on Sunday confirmed that bodies of the two children were recovered in the incident.

The incident occurred around 9:40 p.m. at Adeleye Street, Lady Lark in Bariga.

The Permanent Secretary of LASEMA, Femi Oke-Osanyintolu, said the rescue team was deployed to the scene after they received a distress call.

He added that three men sustained injuries in the incident and were taken to a nearby hospital.

“The Agency activated its response to the above incident and upon arrival at the incident scene, discovered that the tank scaffolding of a two-story building collapsed on a bungalow beside it and affected two rooms,” Mr Oke-Osanyintolu said.

“Unfortunately two children died from the impact. Three adult males sustained injuries and were taken to nearby hospitals.

“The Agency’s response team alongside Lagos State Fire and LASBCA are responders at the incident scene. Rescue operation is ongoing.”

In the last 12 months, Lagos has been plagued with several building collapse incidents leading to casualties.

In November, at least 44 people died when a high rise building crumbled.

Another building in the Ago Palace Way area of Lagos State, collapsed on May 7.

On price-fixing and identity management: Priorities for the next president, By Tunde Leye