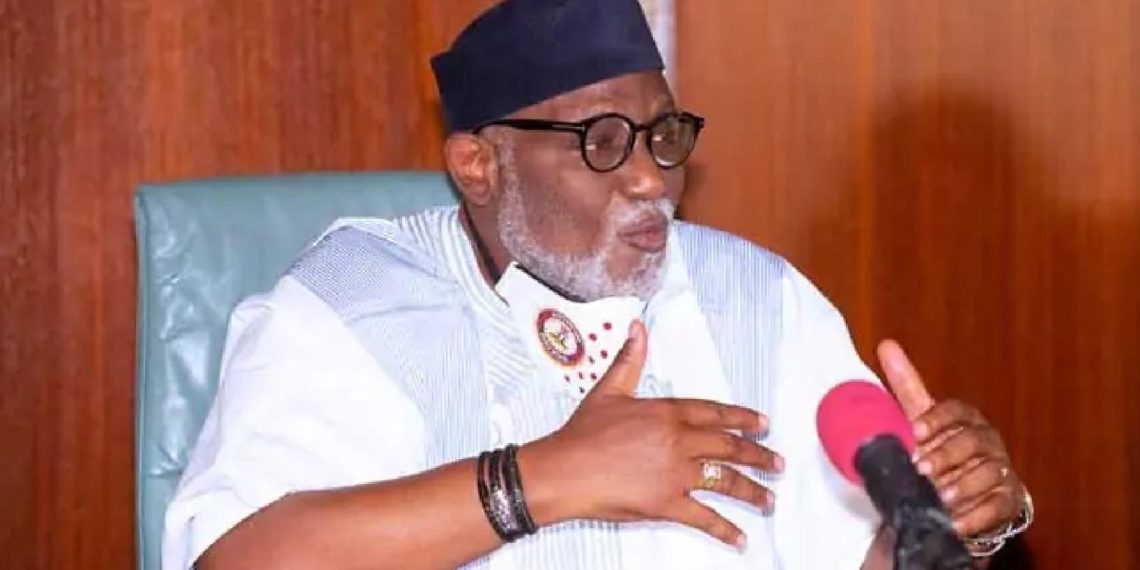 The committee found out that there were workers who earned double salaries, and some pensioners were still earning their regular salaries along with their pensions.

A report by a panel on the verification and the cleaning up of the payroll of civil servants in Ondo State has indicated a loss of about N500 million to ghost workers since the life of the Rotimi Akeredolu administration.

The governor set up the committee at the assumption of his second term in office following suspicion that the state’s payroll including salaries and pensions had been compromised.

The committee, led by the Permanent Secretary of the Ministry of Finance, Victor Olajorin, submitted its report on Wednesday to the state governor in Akure.

According to Mr Olajorin, the committee found out that there were workers who earned double salaries, and some pensioners were still earning their regular salaries along with their pensions.

Displeased by the findings, Mr Akeredolu ordered the Head of Service to dismiss officers who are receiving double salaries from the state payroll.

He decried the several infractions and over-bloated workforce occasioned by the presence of ghost workers.

The governor also directed that all ministries, departments, and parastatals in the state should stop recruitment under any guise until the Salary Verification Committee has concluded its assignment.

“We have an over-bloated workforce, and undoubtedly, I am sure there are many ghost workers,” he said.

“Those who are receiving double salaries, apart from recovering the money from them, I am directing the Head of Service to get them dismissed. They must serve as a deterrent to others.”

Mr Akeredolu appreciated the committee for doing a good job and not compromising their integrity.

Mr Olajorin had earlier informed the governor that the first and major step taken by the committee was to contact the various agencies including the Teaching Service Commission (TESCOM), Hospitals’ Management Board (HMB), Local Government Service Commission (LGSC) among others.

He noted that the committee also obtained vital documents like the Nominal Roll, Disposition List, Pay Register and Pension Payroll so as to achieve its mandate.

“The documents were consequently scrutinized and in the process, some infractions were discovered,” he said.

“Mr Governor, permit me to inform you that our beam light was initially focused on TESCOM and some of the infractions detected were about: Officers/pensioners receiving both salary/pension, retired officers later reappointed and drawing salary/pension, officers whose salaries are hanging among others.

“Details are contained in the Volume 1 report of the Committee. In the process, a sum of N304,859,812.51 was discovered as the aggregate loss to the state government from the above infractions.

“In furtherance of our activities, attention was shifted to the pay register of Hospital Management Board. The committee carried out on-the-spot verification for both medical and non-medical personnel in their various facilities across the state.

“The exercise led to the discovery of some unwholesome practice like abscondment, study leave without pay, payment of salaries to officers after resignation, while some officers couldn’t be traced to any health facilities.

“So far, a sum of N192,873,592 has been discovered from HMB as the total loss to the state government. Mr Governor, permit me to mention that the committee has so far, identified the sum of N497,733,404 for infractions in TESCOM and HMB.”

Mr Olajorin also explained that another issue of concern found by the committee was the lopsidedness observed in the posting of officers to health facilities in the urban centres at the detriment of the ones in the rural areas.

The state government had since last year been at loggerheads with workers over the payment of salaries.

At some point in 2021, workers received salaries in percentages due to what the government described as the paucity of funds.

However, the governor recently promised to pay all outstanding arrears of workers before the end of 2022.

The economics of 2023 presidential candidates, By ‘Tope Fasua

A review to review a review, By Idang Alibi