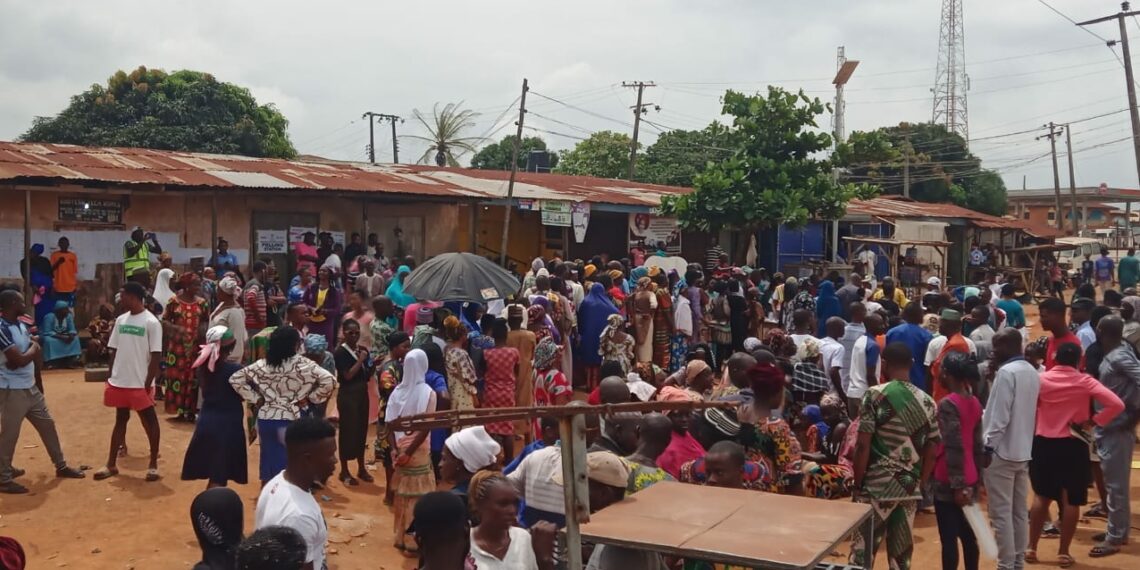 Voters on queue waiting to vote

Situation Room says no violence was recorded and the numbers of people who came out was encouraging.

The Nigeria Civil Society Situation Room said codes and coupons were used to extract commitments from voters in the Osun governorship election, as opposed to the blatant money exchanging hands in the Ekiti election of last month.

The Coalition of Civil Society Organisations (CSOs) made this known in its Second Preliminary Statement on the Osun Governorship Election.

The convener of the CSOs, Ene Obi, said while the group was observing the election, it observed another means of vote trading.

She added that vote trading was recorded in most of the areas observed, particularly outside Osogbo.

“Knowledge of voting procedures and civic education of voters was very poor.

“Voting cubicles in many of the polling units were not positioned to ensure secrecy of the ballots, making it possible for voters to flash their votes to other people.

“There was open negotiation of buying and selling of votes well-coordinated by the polling agents in many of the polling units.

”There were no complaints from any of them against each other.

“Codes and coupons were used to extract commitments from voters as opposed to the blatant money exchanging hands observed in the Ekiti State Governorship Election.”

She said that so far, commendably, Osun witnessed a high rate of Permanent Voters Card collection, recording a total of 1,518,303 as reported by INEC.

Ms Obi said that voting started peacefully, not showing any indications of the apprehension that had trailed the days preceding the election.

She said that Situation Room received reports from its network of observers of early arrival of materials and INEC officials in most of the polling units which led to early commencement of voting.

“The BVAS were deployed according to the number of registered voters.

“In polling units with over 1,000 voters, INEC kept to its promise to deploy two BVAS machines. The machines functioned credibly well.

“There were issues with the fingerprint verifications, however, the facial capture worked very well recording approximately one minute for accreditation and voting in Osogbo and in outside areas, it took longer.”

Ms Obi said that the group also observed there was adequate presence of security personnel across the state and deployed across most of the polling units visited.

She added that security personnel were friendly and professional in their approach and a number of them complained of not receiving their allowances ahead of the election.

She said that political party agents were present in most of the polling units observed – a minimum of four party agents and maximum of six.

Ms Obi said priority voting was given to the elderly and persons with disabilities in most of the polling units.

She said that from the Situation Room’s observations, no violence had been recorded and the numbers of people who came out was encouraging.

Ms Obi said that the group commended the people of Osun for coming out early to cast their votes, especially the elderly who waited in queues patiently.