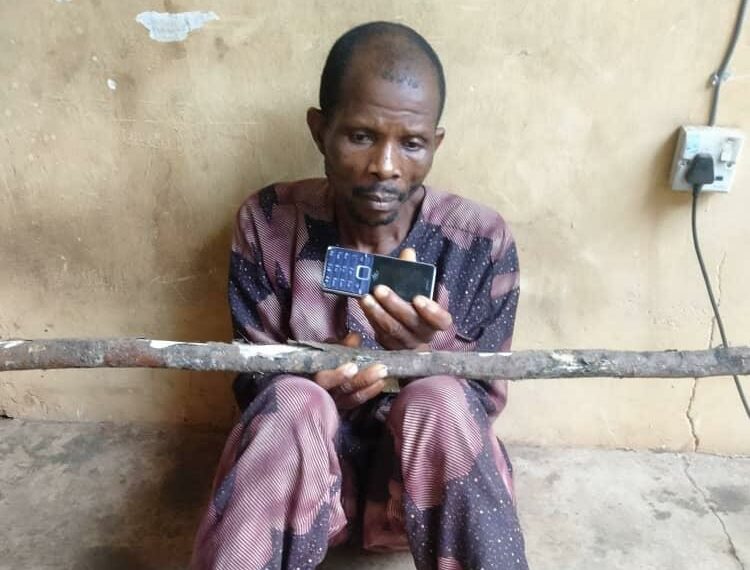 The police alleged that both the victim and the suspect are child traffickers.

The police in Ogun State, on Tuesday, said they have arrested a 54- year- old man, Dauda Bello, for killing a 71-year-old woman, Mesesi Adisa.

The suspect, who allegedly cut off the victim’s wrists and ankles, was arrested on July 7, 2022, at Olodo, Imala.

Abimbola Oyeyemi, the police spokesperson in the state, said in a statement that they arrested the suspect following the sudden disappearance of the victim, who left home on June 8 and didn’t return.

Mr Oyeyemi, a Deputy Superintendent of Police, said the relative of the victim reported a case of a missing person at Sabo/Ilupeju police station in the town.

He said the case was later transferred to the anti-kidnapping unit of the State Criminal Investigation Department for further investigation.

The anti-kidnapping unit traced the last place visited by the victim to be the house of the suspect, the police said.

The police alleged that both the victim and the suspect are child traffickers.

According to the police, the suspect killed the victim after he discovered she was holding onto a huge amount of money, against the expectation of the suspect considering their last deal.

“This made him hit the woman on the head with a heavy wooden stick, which made the woman to be unconscious after which he carried the unconscious body of the victim to the bush where he finally snuffed life out of her,” read the statement.

Mr Oyeyemi added that the suspect confessed further that when he searched the woman’s body, he discovered she only had only N22,000 with her, which he took with disappointment.

“Having realised that his aim of getting much money from the victim was in vain, he decided to cut off her two wrists and ankles, which he claimed to have been sold to somebody who is now at large.”

The police added that the dismembered body of the deceased has been recovered from the shallow grave where the suspect buried her.

Meanwhile, the state’s commissioner of Police, Lanre Bankole, who commended the team for a thorough job, has ordered that the case be charged to court after the investigation.

You underestimate ‘party structure’ at your own peril, By ‘Tope Fasua