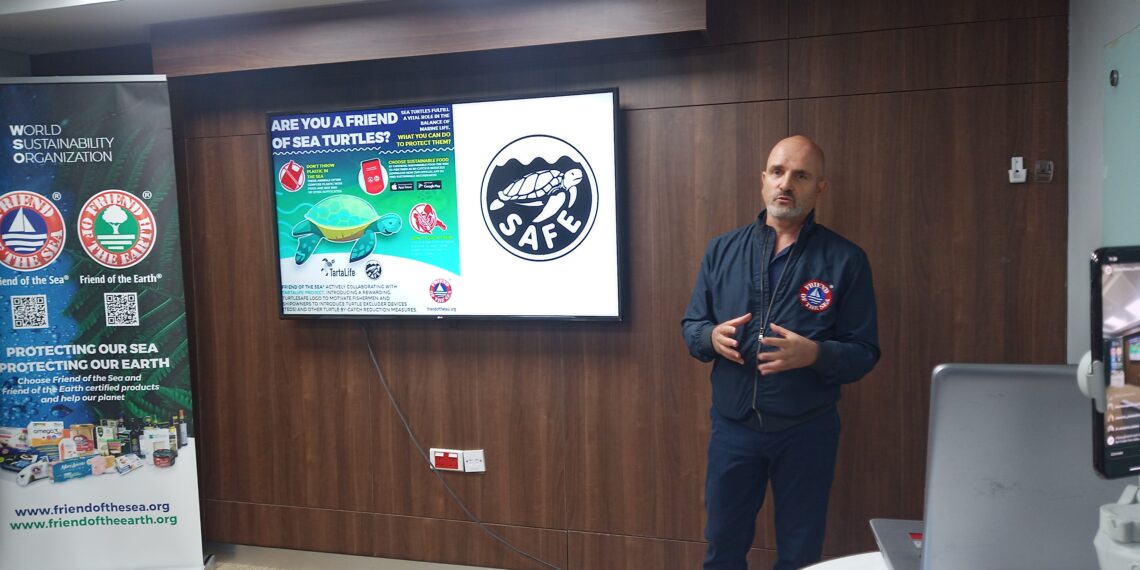 Director of the World Sustainability Organisation (WSO), Paolo Bray, discussing the importance of sea turtles in the ecosystem.

A representative of The Sea Turtle Sanctuary (TSTS) said it is challenging to convince local fishermen to release sea turtles after the catch.

In an event held in Lagos on Tuesday, the founder and director of the group, Paolo Bray, told journalists that sea turtles act as a check on predatory species, especially jellyfish which feed on other fish of commercial value.

The group under its project, Friend of the Sea, said that excess jellyfish population can disrupt marine environments.

“So in areas where we have seen a decrease in turtles populations due to the accidental bycatch in fisheries as in the Gulf of Mexico, which is the case study, we have seen amazing growth in jellyfish population with the detrimental consequences for the other fish stocks which have decreased dramatically,” Mr Bray said.

“And this could very soon be up and although it’s also in the waters of Nigeria and also causes the decrease of bycatches of other important commercial species.”

He said Nigeria has five of the seven species of sea turtles and they should not be allowed to go into extinction.

“They come to the land to lay eggs which exposes them to poaching. They lay up to 10,000 eggs,” he said.

Mr Bray said the sea turtles are faced with natural and man-made threats.

While the man-made threats include, mangrove destruction for firewood, light pollution, lack of research data, real estate, and plastic debris.

He further said that sea turtles are hunted for food and shell (nest predation), and traditional use.

He said that there is a need to create awareness and alternatives to poaching.

Doyinsola Ogunye, a representative of The Sea Turtle Sanctuary (TSTS), said it is challenging to convince local fishermen to release sea turtles after the catch.

“It’s a huge challenge in blood and sweat from getting the calls that the turtles are being poached. To find your way there and having to convince these people and take the turtle back, sometimes the turtle is already distressed,” Mrs Ogunye said.

“And now in Nigeria, we don’t have any space on our shorelines that cater to turtles that we find. So it’s between, you know, the devil and the deep blue sea type of thing, where we have to release the turtles to fend for themselves, as opposed to you know, taking the turtle in for one or two days to find out if it’s fit for that journey.

Mrs Ogunye said the major challenges are ignorance and lack of enforcement of the law.

During the event, Atlantic Shrimpers Limited was awarded for the “company’s engagement to reduce turtle bycatch.”