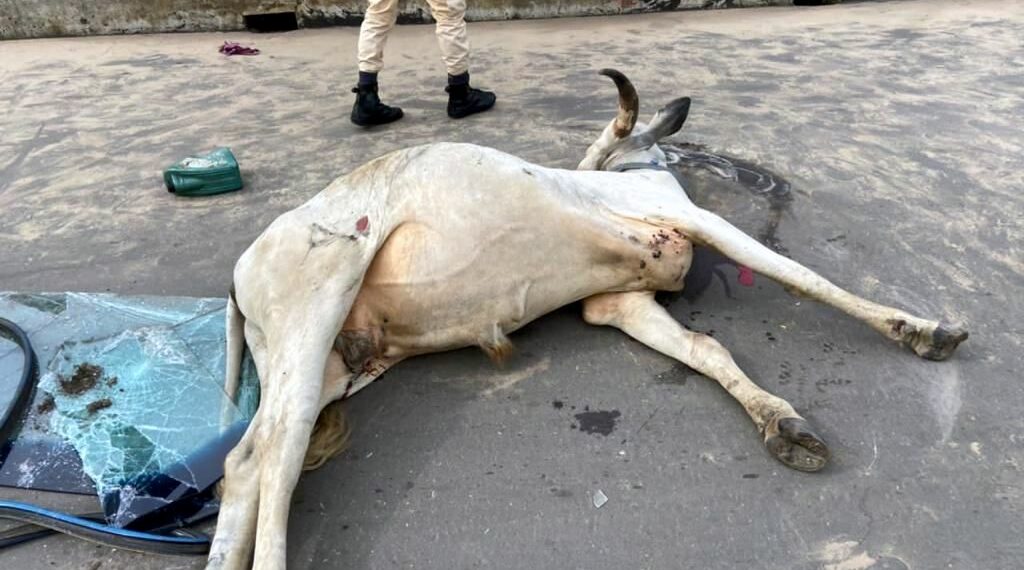 One of the cows hit by the 'Danfo' driver

The police said that two cattle herders have been arrested but a witness said that only one was arrested.

Multiple social media users said that a commercial bus called ‘Danfo’ suffered a brake failure and rammed into two cows in the area leading to their death.

In retaliation, a cow herder stabbed the man believed to be the bus conductor while the driver escaped.

The incident led to temporary roadblocks on the expressway by some youths in the community.

In many viral videos seen online, the corpse said to be that of the bus conductor was on the road.

A man pointing to the corpse in Yoruba called the man by his nickname ‘Omo ga’. He said that they were together two days ago.

A resident told PREMIUM TIMES that the bus was going to Mile 2 when the incident happened.

“The conductor ran to the police station but they didn’t allow him in. Then the herders met him there and one of them stabbed him. He died there,” he said.

“We don’t know where the driver is up till now. It seems the driver was reversing when the incident happened.

“The conductor ran into the police station thinking that he would be protected.

He added that some youths in the community had stood up for reprisal against the herders but were prevented by security operatives.

“The road has been cleared, and the corpse has been taken away,” the resident said.

Benjamin Hundeyin, the spokesperson for the Lagos police command, told this newspaper that the cattle herders

“attacked someone mistook for a bus conductor resulting in his death.”

He denied reports claiming that the police refused to shield the bus conductor from the attack.

“He was not chased, he was grabbed and attacked on the spot,” he said.

“The two herders have been arrested.”

But a witness, who identified himself as Shola, said the Lagos Neighbourhood Safety Corps (LNSC) seized one of the cows.

He said soldiers and police are now hunting for the alleged killer.

He explained that the cattle herder was trying to cross to the other side of the expressway when some of his cows ram into the road and the bus driver hit two of them.