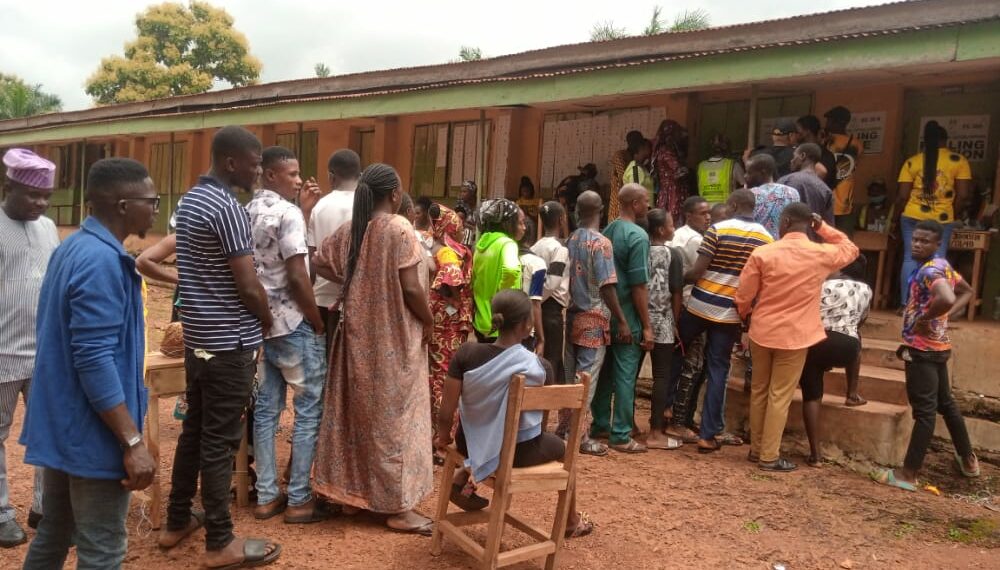 #EkitiDecides2022: Voters queue up to vote their favorite candidate

A resident said agents of political parties distributed between N10,000 and N12,000 to voters to vote for their preferred candidates.

Nigeria Security and Civil Defence Corps (NSCDC) have dispersed a group of residents allegedly being bribed at Mobil filling station, opposite St. Michael’s School in Ajilosun area of Ado-Ekiti.

A News Agency of Nigeria (NAN) correspondent, who monitored voting across the state, observed a large crowd being dispersed by a team of NSCDC operatives, led by acting Deputy Commandant, Haruna Muhammed.

A resident of the area, Musa Faruk, said some suspected agents of political parties had been distributing between N10,000 and N12,000 to the voters who agreed to vote for their preferred governorship candidate.

He explained that at polling units 1 and 2 of Ward 4 at St. Michael Nursery and Primary School, the agents stood close by to observe who the voters voted for before giving them the money.

Another voter, Veronica Famigun, who was in the midst of the crowd, said that vote-buying had been ongoing for hours, expressing happiness over the way the NSCDC operatives dismissed those who were involved in it.

She stressed the need for security agents to also beam their searchlight on other polling units across the state where such acts might be going on.

Speaking on the development, the civil defence officer, Mr Muhammed frowned at the menace of vote buying by political agents, saying his men had no choice than to disperse those engaging in the practice.

He said it was important for citizens to understand that elections should be free and fair.

The NSCDC officer advised parents to restrain their wards and keep them indoor as anybody caught in the act of vote buying would be arrested and made to face the law.

NAN, however, reported that nobody was arrested at the scene, as the suspected perpetrators immediately took to their heels.

More security operatives had been drafted to the location.

2023: My emergence as PDP running mate will not affect South-east agitation for president — Okowa