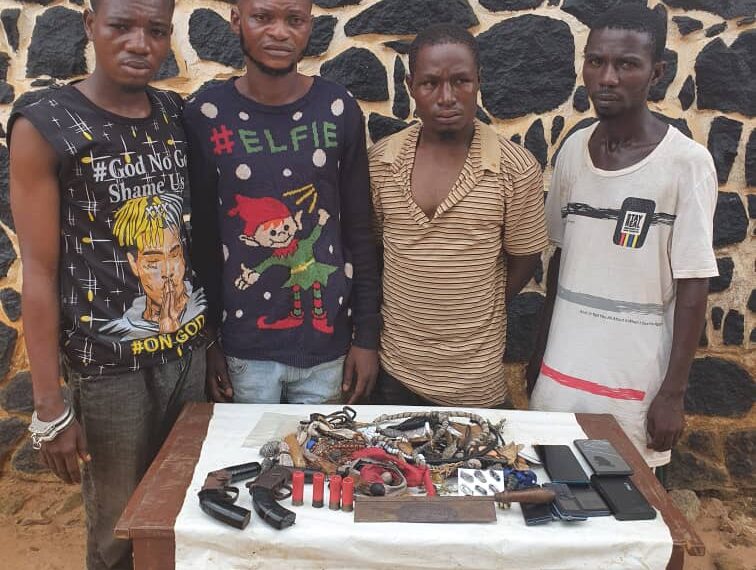 Police arrested the suspects on Sunday upon intelligence that some members of the Aiye cult group were holding their meeting in their hideout.

The police in Ogun State have arrested four suspected cultists in connection with the murder of one Segun Onifade.

Police arrested the suspects on Sunday upon intelligence that some members of the Aiye cult group were holding their meeting in their hideout.

Abimbola Oyeyemi, the police spokesperson in the state, said in a statement on Monday that the suspects were involved in Mr Onifade’s death.

Mr Oyeyemi said the suspects had been on the wanted list of the command for a while.

“The suspects were holding a nocturnal meeting at a hideout behind Eleja Primary School, Igbo-Ewe area of Ilaro.”

Upon the information, the DPO of the Ilaro division, Olayemi Jacob, a chief superintendent of police, mobilised his men to the scene where the suspects were arrested.

Those arrested include Samson Jacob (a.k.a Cyborg), Iyanu Kazeem Akande (a.k.a Omo Iyami), Adebayo Adeoluwa (a.k.a Dudu), and Yusuf Adelakun.

Other exhibits allegedly found on them include assorted charms, Indian hemp, and one unregistered red Bajaj motorcycle.

The Commissioner of Police, Lanre Bankole, has ordered the transfer of the case to the anti-cultism unit of the State Criminal and Investigative Intelligent Department, CIID, for further investigation.