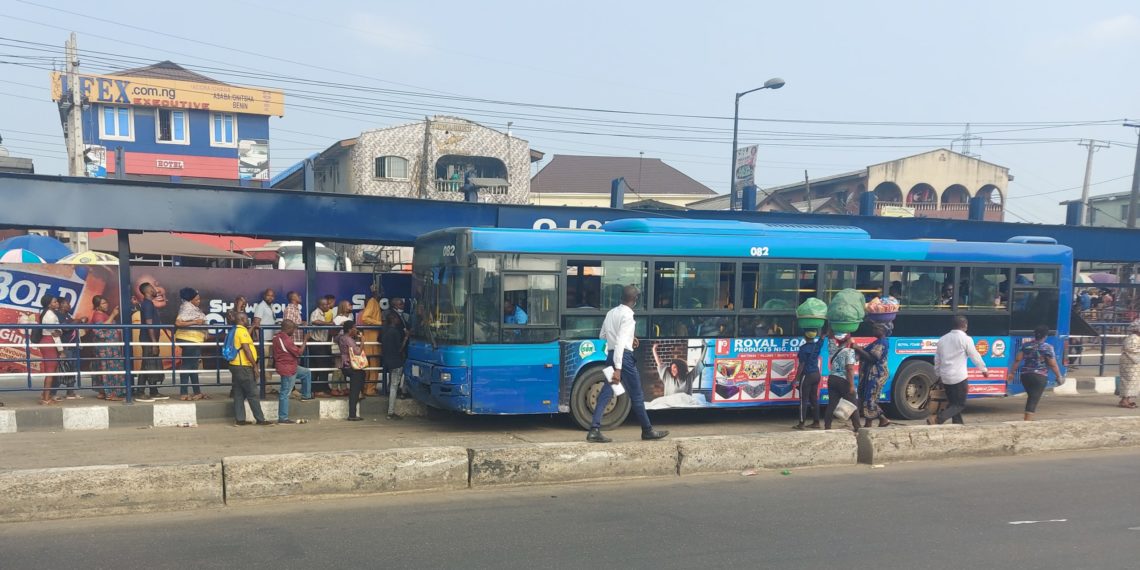 “These monies are very important, if you lose N200 for 10 days in one month, you already lost N2,000 to the government.”

On a recent afternoon in the Ikorodu area of Lagos, scores of commuters waited at the bus station for the arrival of the Bus Rapid Transit (BRT) buses to convey them to their destinations. A PREMIUM TIMES reporter joined in the wait, the aim being to ascertain the ease of commute for Lagosians.

About an hour and a half later, one of the buses arrived.

And a scramble ensued. Passengers who were, hitherto, not on the queue battled those in the line for a space in the bus.

It took the arrival of a BRT official to restore orderliness.

Then, with the use of their cowry cards, the passengers began to board. The card is a reloadable prepaid card that once tapped against a machine in the bus, scans the bar code and deducts the appropriate fare for the trip.

When it got to the turn of a middle-aged man, his card was rejected due to insufficient funds. 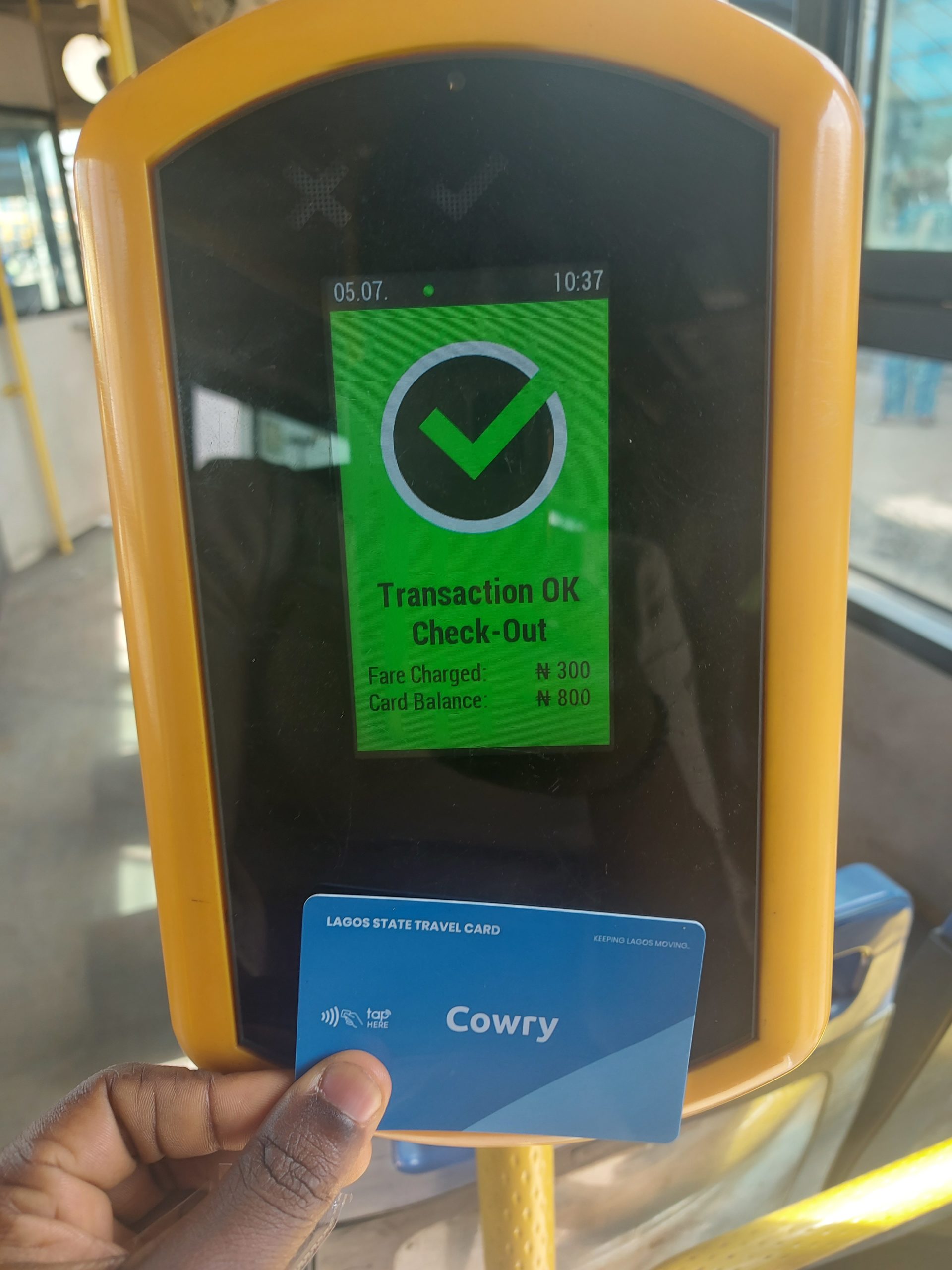 “What are you telling me? I loaded N1,000 two days ago and only went to Maryland to and fro,” the man barked at an official.

“I should have about N400 left, now you are telling me I cannot get on the bus because I have no funds. This is nonsense.”

The man’s action halted boarding for a while, as other passengers joined him to narrate their experience.

Murisiku Amure, a resident of Ikorodu, said he has been overcharged several times while using the BRT buses.

“I usually go to Ketu from Ikorodu which is N300 fare,” Mr Amure said.

“What they do is they charge N500 when you enter the bus, but when you tap out and alight from the bus, they refund N200. That has been the process, it was smooth for a while but at some point, the system stopped working.

“That means if they charge you N500 and the system stops working, you can’t tap out for them to refund you N200, so it will charge N500 instead of N300. That has been the case for a very long time and many people complain about the system not being transparent,” he said.

Mr Amure said he experienced another anomaly with the bus on July 29 as the bus charged N500 and failed to refund the N200 for several passengers.

“That was how they charged for other passengers in the bus, it was really rowdy, we were all complaining about the system.

“They just find ways to extort people and the transport fare is not even that cheap. Before Ikorodu to Ketu was N150, they are now charging N300 with the pandemic and it is not as if the economy is good. For a government bus, a bus that is a public-private partnership, it is really bad for them not to have a transparent system,” he said.

“These monies are very important, if you lose N200 for 10 days in one month, you already lost N2,000 to the government,” Mr Amure added.

Peju Ogunmuyiwa, another passenger, said the tedious process of getting a refund discourages passengers from seeking one. 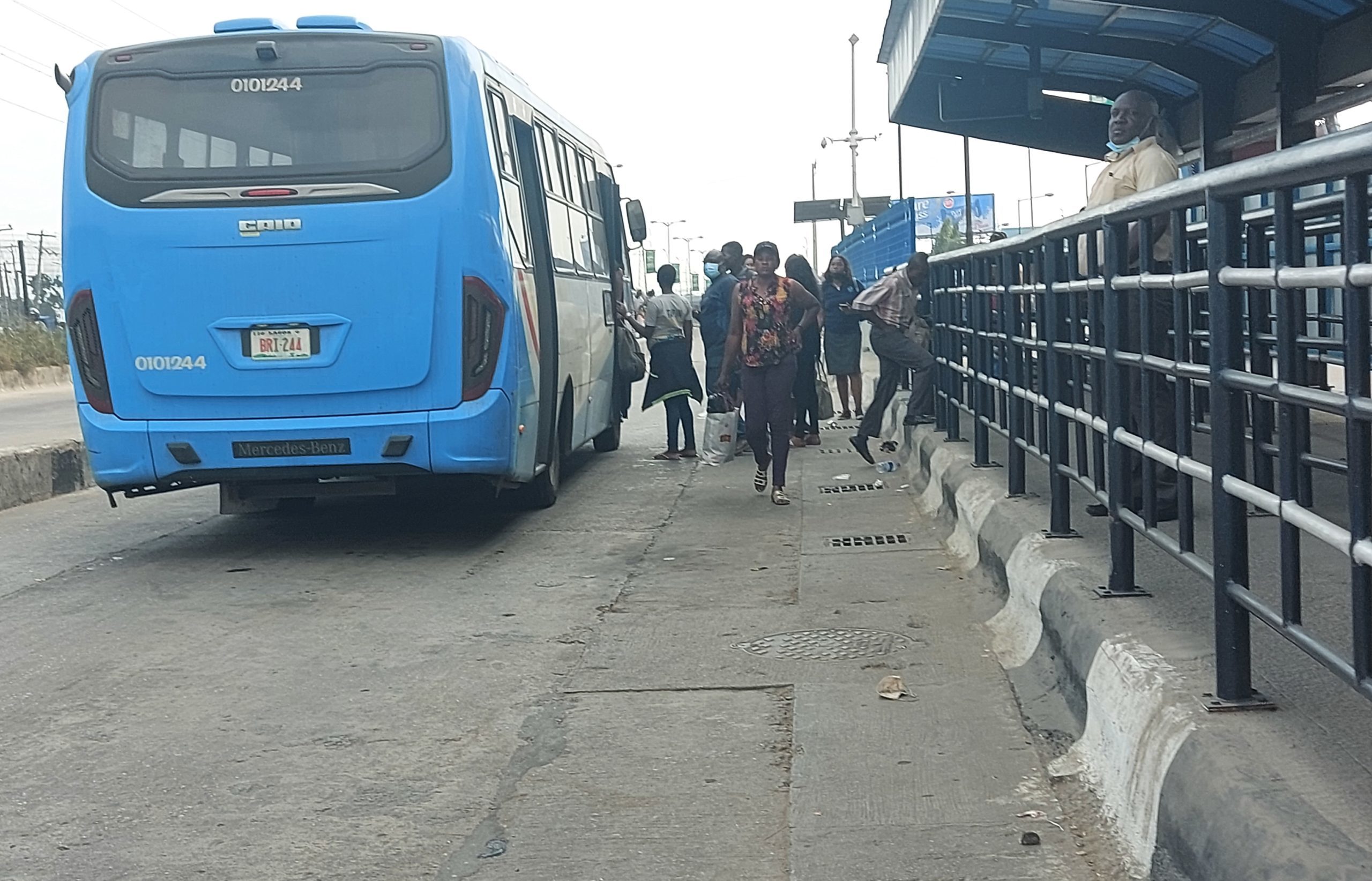 “It is not even worth it because the process and stress you will go through is more than the money you have lost,” she said.

“Imagine wasting hours and going through stress because you need your N200 back.

“They also know many people will not come to them, this is why they have refused to create a public complaint team at the bus stations.”

Mrs Ogunmuyiwa said commuters patronise the BRT buses because they are cheaper, but that is no longer the case.

“In fact, yellow buses are cheaper than BRT buses in most cases these days. But people still use them for convenience and to beat traffic because they use designated lanes.”

The Lagos State government in 2020 introduced the cowry card, a cashless payment initiative that is now used for all means of transportation in the state.

According to the government, the use of cowry cards will enhance cashless payments in the transportation industry.

The cowry card is powered by Tap and Pay Technologies. It is a central payment system that collects fares for all transport service providers regulated by the state government and remits a percentage to the operators of the buses.

Yekeen Mutiu, the spokesperson for Primero Transport Service Ltd., admitted that several customers who had been overcharged by the system had complained to the company.

“As an organisation, we are being regulated by LAMATA, Lagos State government owns the process of tap and pay, but as an organisation, it is our responsibility to take care of any complaint people make from our buses.

“We have refunded over N200,000 to people that are genuinely overcharged and we are still doing that,” he said.

Mr Mutiu said network problems are the major cause of validator malfunction on some BRT buses.

“We are still managing network issues. As a country, we are still developing in terms of technology development, there is no way you will have such a huge infrastructure and e-payment platform that there will not be hitches.

“The hitches in the technology process are what causes technology delay that some people are experiencing and are unable to tap out when they get to their destination,” he said. 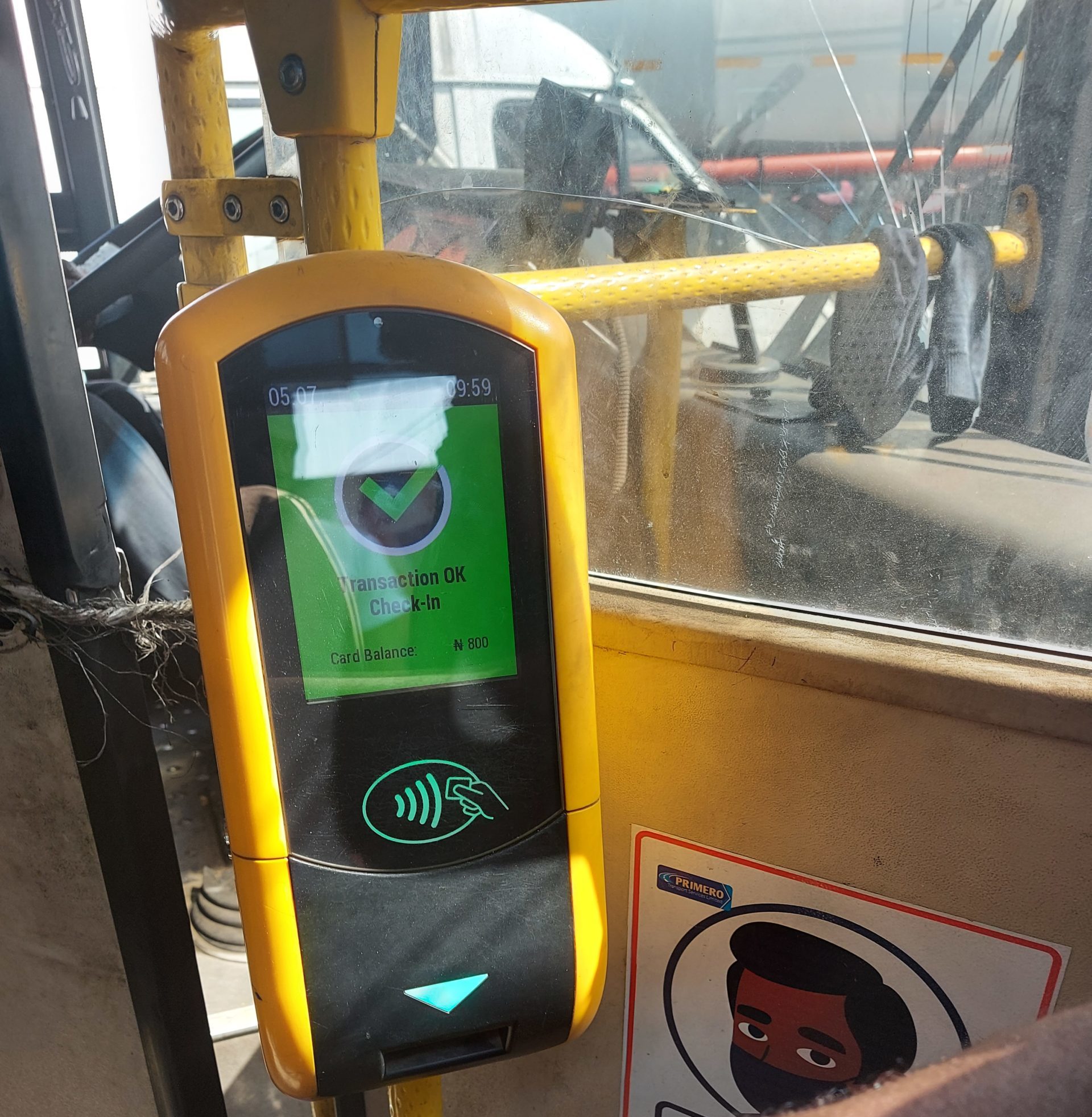 Mr Mutiu explained that there has been a recent upgrade of validators in all BRT buses.

“The issue of some validators not accepting customers’ cards has been resolved. They are all accepting cards,” he said.

Kolawole Ojelabi, the spokesperson of LAMATA, said lots of the issues experienced with the electronic payment system are caused by customers.

He said the agency has found out that passengers forget to tap out, thereby causing the validator to deduct the maximum fare.

“We are trying to educate members of the public regarding that,” he said.

Mr Ojelabi explained that when passengers use the BRT buses, they are expected to tap out at their destination using the cowry cards for accurate fares to be deducted. He said when passengers fail to tap out, the validators assume they have gone through the maximum trip and deducts equivalent fare.

“The other thing that people do is to tap out at the middle of the road and remain on the bus. Some of them, again when they are coming down, they will still mistakenly tap out,” he said.

The official said that for people that tap out twice, maximum fare will be deducted and the agency will carry out enlightenment regarding it.

“The system is not affected by network, information gathered by the system is done when the network is highest. The system allows even when off-network to tap in and tap out, it is not a matter of network,” he said.

Mr Ojelabi said the agency will partner with bus operators to have monitors on the bus who will test people’s cards and regularly announce that people should tap out.

Oscar Odiboh, a senior lecturer and transportation communication consultant at Covenant University, said the digitalisation of the transport system in Lagos shows that the state is embracing global standards.

“If the state decided to go smart, they are actually going according to global standard, it should be commended.

“There are standards all over the world. If you go to Dubai, Paris, Tokyo and many other countries, you experience seamless transportation. There is a global approach to transportation management,” he said.

READ ALSO: We are struggling to import vehicle parts, BRT operator cries out

Mr Odiboh said there are several problems the government is trying to tackle by introducing a digital payment system, including corruption and embezzlement of funds by officials.

“The essence of what the government is doing is to ensure sanity and global standards. Technology is maximised to reduce the problem and ensure that there is adequate return on investment,” the expert said.

He said the digitalisation of transportation in Lagos will experience some challenges at the onset due to some local phenomenons.

“If you have the government doing this and it is not fully digitalised or automated, it is because there is the local reality which means you have to go step by step. The local reality is not something you can wish away like that,” he said.

Mr Odiboh added that technology is the signature of global standards and can make ticketing, boarding, disembarking, and management of the BRT buses seamless.

Another expert, Dina Adeolu, said the move by the Lagos government to implement the payment system is part of the smart city scheme plan – the migration from the cash-based payment system to the modern payment method.

Mr Adeolu is a lecturer in the department of transport management, Olabisi Onabanjo University. He said if used effectively, the electronic payment system will solve problems associated with the cash-based system including loss of revenue by operators from insider fraud, robbery of staff on duty, slow report of financial inflow and others.

Speaking on the problems currently being experienced by passengers, the expert said it is “teething” – which is as a result of telecoms network disruptions which distorts tapping in and exit of passengers.

“Whatever the challenges will be perfected over time, it’s the way to go for improved public transit operation particularly in Lagos – the most densely populated area in Africa where there is need to improve access and acceptance of public transportation,” Mr Adeolu said.

Mr Adeolu added that internet network supply should be reassessed to improve access and to avoid the disruptions currently being experienced by users.